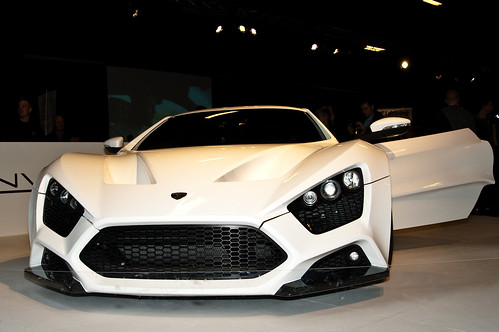 History
Zenvo Automotive was founded in 2004. The prototype was completed in December 2008 and is in the final phase of testing before production begins in 2009. The designation of the car is Zenvo ST1. Only 15 cars are to be built and will be sold to approved customers.

Limited production
According to Jesper Jensen and Troels Vollertsen, the two-man team behind the ST1, some 250 Bugattis are produced each year. Though they are among the world’s most expensive cars, exclusive customers will only buy them if they are unique. That explains why they have decided to keep the Zenvo series down to just 15 cars.

Danish design
The Zenvo is entirely a result of Danish design. The carbon fibre body is made in Germany and many components such as gauges, gas tank, ABS brakes, anti-spinn, airbags and such come from US or German cars. The car’s aggressive lines were designed by Christian Brandt and Jesper Hermann who own the car design consultancy hermann&brandt. Brandt, who was head of design on the project, has also worked for Alfa Romeo and Kleemann, an after-market tuning company for customising Mercedes-Benz cars located in Farum, Denmark.

Cost
It is estimated that the basic cost of the car, without registration or tax, will be around five million Danish kroner, which is approximately one million US dollars. The cost of putting the car on the road in Denmark would be around 16 million kroner as a result of registration expenses. But Zenvo are aiming at the export market alone.
(Source: Wikipedia)