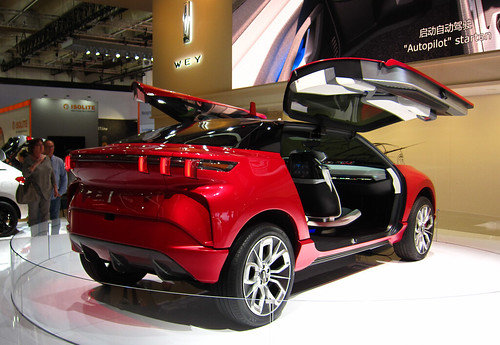 Great Wall was established in 1984 and is China’s largest maker of SUVs and pick-ups, selling over a million SUVs each year in the local market, today mostly under the Haval-flag, the Great Wall-badge is now only used for the pick-up Wingle and small sedans (Voleex C30, C50), which will be phased out soon. In 1998 Great Wall already reached top position in the Chinese pick-up market.

Haval became a sub brand in 2013, as Great Wall aimed to build on the strong brand recognition of Haval. Haval has a line-up which fully consists of SUVs and crossovers, passenger cars and pick-ups continue to be sold under the Great Wall marque, although passenger cars have been phased out, apart from the Voleex C30.

Wey is a new upmarket brand of Haval/Great Wall. Like the cars of its parent company, they are designed by former BMW SUV designer Pierre Leclercq. Wey was launched at Auto Guangzhou in November 2016 with the W01 and W02, which went into production as VV7 and VV5 respectively. The VV5 has the size of a Audi Q3 or BMW X1 (4.4 metres), while the VV7 is somewhere between BMW X3 and X5 (4.8 metres). The Pi4 concept previews a BMW X4/X6 or Mercedes GLC/GLE Coupé-style SUV based on the VV7, while the P8 is a plug-in hybrid version of the VV7, which premiered on the IAA Frankfurt 2017 car show. The XUV Concept is another world debut in Frankfurt.