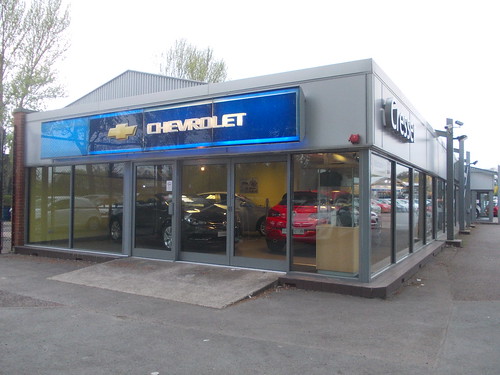 Chevrolet Europe has been axed and will withdraw from the UK by the end of the year.

As you can see here at this dual branded Cresser Vauxhall/Chevrolet dealer in Redditch, there wasn’t a bow-tied badge to be seen anywhere, other than on the signage.

Which is surprising, but there’s a good reason for this:

They are flying out of the showrooms because of great deals at the moment:

The Orlando 7 seater MPV is probably the best model in the range, and to bag the diesel version for £13k is an absolute bargain.

Sales of Chevrolet cars are double what they were this time last year (figures from February ’14). In fact Chevrolet outsold Jaguar, Lexus, Mitsubishi, Smart, Porsche, Alfa Romeo and even value brand Dacia that month.

Personally, I’ll be sorry to see them go, but before they had massive price cuts, they were priced just too closely to Vauxhall models, and they also were also quite similar to them in general. Even GM admit their cars were undermining Vauxhall-Opel’s sales.