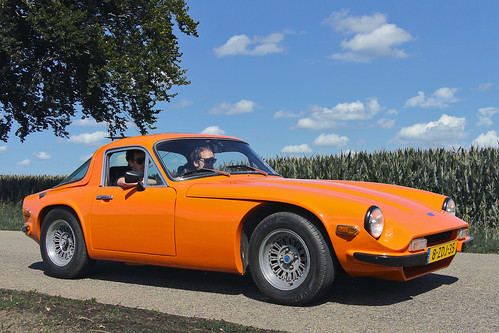 Special:
– TVR was founded in 1947 by Trevor Wilkinson, under the name of Trevcar Motors. The first car was built in 1949.
– Many of the early cars were sold in kit form to avoid a British tax on assembled cars but in the 1970s the tax loophole was closed and the kit-form option was removed.
– In 1954, Wilkinson changed the name of the company to TVR by removing two vowels and a consonant from his first name: TreVoR.
– They manufactured lightweight Sports Cars with powerful engines and was the third-largest specialised Sports Car manufacturer in the world, offering a diverse range of Coupé’s and Convertibles.
– The Taimar, part of the M Series, was nothing more than the slightly re-styled (at the rear) 3000M, with a large lift-up hatchback, Jensen Interceptor style.
– Its name was supposedly created from "Tailgate Martin".
– It was introduced at the October 1976 British International Motor Show in London.
– The era of the M Series, designed by automotive engineer and dealer Mike Bigland, is commonly associated with Martin Lilley who, together with his father, took ownership of the company on 30 November 1965.
– After production of the M Series ended, TVR sold the production rights and tooling for many M Series components (including GRP bodies) to David Gerald TVR Sportscars Ltd.
– Unusual at the time, TVR offered a five-year guarantee against corrosion on the M Series chassis. Corrosion was prevented by leaving a film of oil from the manufacturing process on the metal, capping the ends of the tubes and fastening components without driving fasteners through the tube walls.