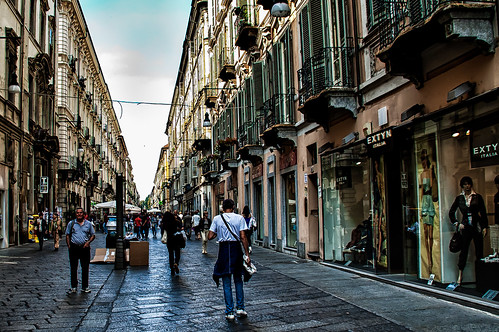 The enlightenment writer Montesquieu once dubbed Turin as "the finest village in the world" thanks to a modern city plan begun in the 17th century. While many Italian cities can be a warren of twisting side streets, Turin boasts wide avenues with arcades, large squares and plenty of palazzi. To get a bird’s eye view of the city take a glass elevator ride to the top of La Mole Antonelliana, which is sort of like the Italian Eiffel Tower. This edifice was originally designed to be a Synagogue, but today is known for a great view of Torino as well as housing the museum of cinema. Modern Turin (Torino) is proud of its past but not obsessed with it like some places that rely on tourism. The city is the capital of Italian engineering and its southern suburbs the home to automobile manufacturers Fiat and Lancia. Fortunately, all of this heavy industry lies outside the main city, which maintains its fashionable and modern charm. Today the life of the town is centered at Piazza San Carlo and on the main streets Via Roma and Via Po. Under the arcades of Via Roma are some of the trendiest shops in Italy while cars whiz by on hot summer nights. Piazza San Carlo is a beautiful square lined with cafes that lies halfway down Via Roma and is known to be a popular meeting place among locals. That is not to say that there is nothing to do in Turin but shop, there are plenty of sights to see no matter what your tastes. Turin is a great place to visit since it has a little bit of everything: Shopping, cars, history, religion and pleasant open spaces. All of this is accentuated by delicious regional foods, mountain views and an unexcelled wine industry. Turin can be seen a day-trip or as a base for a larger tour of the Piedmonte region. The city was once part of the Kingdom of France during the 16th century and later the home to the House of Savoy. Formerly the Dukes of the region, they later became Kings of a united Italy under Victor Emanuel II. Turin (Torino) is still home to the noble house’s greatest treasure, the Shroud of Turin (Torino) . The Cathedral of San Giovanni, a 15th century Renaissance work contains the Chapel of the Holy Shroud, the baroque resting-place of what is possibly the burial cloth of Jesus Christ. The real shroud is very delicate and almost never shown; however there is a full size replica that is exact in every detail. The atmosphere is haunting yet peaceful under Guarini’s spire topped dome whether you believe or not.