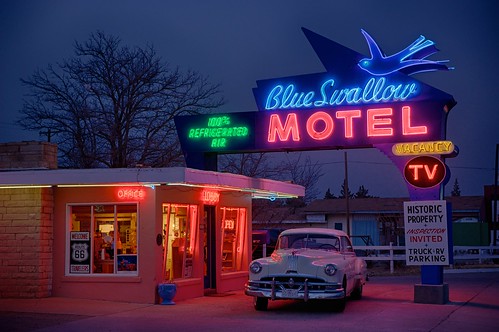 Posting another image from Tucumcari, New Mexico. This is the Blue Swallow Motel, one of the best known motels on Route 66. It’s been in business since 1939, managing to survive the loss of traffic on Route 66 when Interstate 40 bypassed it in the 1960s. The current owners, Kevin and Nancy Mueller, bought the Blue Swallow in 2011. Kevin worked in the automobile industry in Michigan and they both lost their jobs when the economy collapsed in 2008. After some soul-searching, they decided not only that they would own their own business, but that they would own a motel on Route 66. “This was the coolest place I’d ever seen,” said Kevin. “It appealed to me romantically and emotionally.” As for Nancy, she initially thought the idea was “crazy,” but came around after talking to friends and concluding “we have nothing to lose.”

I stayed there the night I made this photo. It’s very well maintained. The rooms are appointed in vintage decor, even including old rotary dial phones. And Nancy makes good muffins to start your day!