…I was panning taxis as a wandered down Broadway between 125th and 108th street. I took these on two separate days, but neither day had too much sun. Out of the mass of taxi pans I like this one the best. It gives some sense of the the crowded city […] 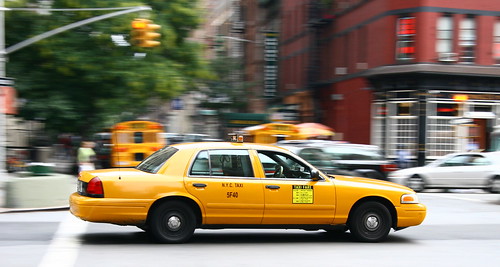 …I was panning taxis as a wandered down Broadway between 125th and 108th street. I took these on two separate days, but neither day had too much sun. Out of the mass of taxi pans I like this one the best. It gives some sense of the the crowded city and the Crown Victoria is crisp. I will try to take some of these in more crowded areas of the city like Times Square…stay tuned 🙂

I like the comment below. First, there are lots of cabs here so posting lots is fitting. Also it reflects the changing vehicle choice. In 2006 90% of cabs were Ford Crown Victorias. This car is based on a 1979 design, sports an inefficient V8 engine and handles like a boat. I was surprised that Toyota Sienna minivans have captured (in 2006) 10% of the market. Now I think they have an even larger share (there are also several Honda Odesseys).

However, bigger changes are coming. By 2013 all NYC cabs need to get better than 30 mpg. That means hybrids and hybrids are especially economical in city traffic. So the last two pans are hybrids; a Toyota Highlander and a Ford Escape. I’ve also spotted a Toyota Prius.

…New York city is full of taxis. There are just about 13000 medallion cabs in all. They are all yellow (well a orange-like yellow). Ever wonder why? Bascially the industry is heavily regulated. The government restricts the numbers of medallions (cabs that can circulate). As a consequence medallions are extremely valuable.

Restricting competition (cabs charge the same rates and there is essentially only one company) helps drivers right? Acutally it doesn’t. There is a large supply of drivers (they compete and drive down cabbie wages) so the guys that benefit from the government regulation are the medallion owners. Consumers are the main losers.

I said heavily regulated. The government specifies the cars that can be used, the types of floor mats you can have, how old the car can be (not over 4 years – so most taxis are run 24-7), how much legroom the cab must have, whether the cab has a CC machine, a GPS etc. etc. Why this need to overregulate the cab industry? Is NYC a special case? No Arlington, Virginia has figured out that it needs exactly 666 cabs. How did this number come up? From a Soviet-style central planner no doubt. Even Madison is in on the game (and Madison actually has a competent local government). They restrict entry to only 3 companies. These companies in return charge significantly higher fares than NYC cabbies. Why? Go figure. Cartels are good for business.