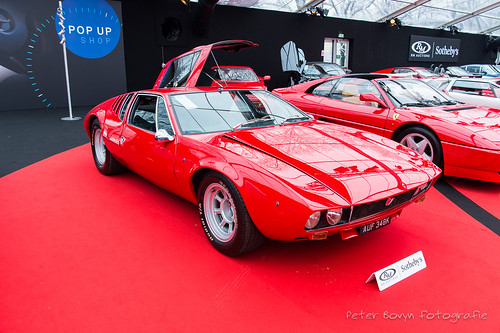 Looking to create sports cars that rivalled Ferrari and Lamborghini, Argentinian racing driver Alejandro de Tomaso began with the Vallelunga before launching the Mangusta in 1967. Bold styling by Giorgetto Giugiario featured gullwing-hinged covers over the engine and luggage compartment. Its name was a jibe at the Shelby Cobra.

The European version received a more powerful Ford 289-cu. in. engine mated to a five-speed ZF gearbox. Contemporary road tests quoted a top speed of 250 km/h. Production ended after 401 cars, and only 150 found European owners. Today, 250 are believed to have survived worldwide.

This example was among the last European cars delivered. Supplied to Greece with the more powerful 289-cu. in. engine, it features the desirable four-headlight nose. Registered in February 1972, it was dark blue … Read More