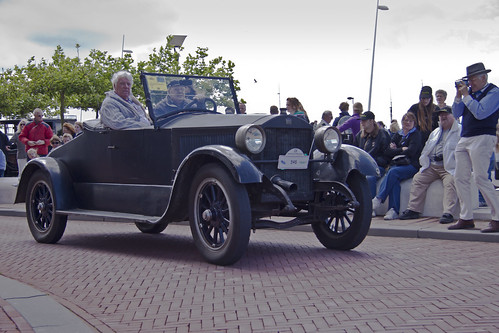 Special:
– "Power, Correctly generated, Correctly controlled, Correctly applied to the rear axle." was Stanley’s slogan at that time.
– It has been said that in order to drive a Stanley one first need learn to drive without watching the road. The need to monitor fuels, water, steam, and lubrication brought a number of valves and gauges to the dash and under the coffin-nosed hoods, and created an impressive display for the passenger but required the driver to be a part-time engineer.
– Twins Francis E. Stanley (1849–1918) and Freelan O. Stanley (1849–1940) were the world’s largest manufacturers of steam cars.
– The 740 had a larger boiler, which increased the heating surface by a third and water capacity by 50 percent.
– A Stanley steam engine provides four power impulses per crankshaft rotation similar to an 8-cylinder internal combustion engine. This provides the steam engine an advantage of more torque in a smaller package.
– Very quiet, but before you could drive away, you have to boil the kettle.
– Range about 250-400 km
– Range and speed depends on the temperature outside.
– The motor is directly connected to the rear axle (without gearbox!).
– The Stanley brothers did’t like the consumer society and therefore they tried to build "forever" continue driving cars, by using many aluminium instead of steel.
– So Stanley Steamers had steel frames and aluminum bodies and trims.
– Widespread use of electric starters (around 1914) in internal combustion engine powered cars ended the era of steam cars.