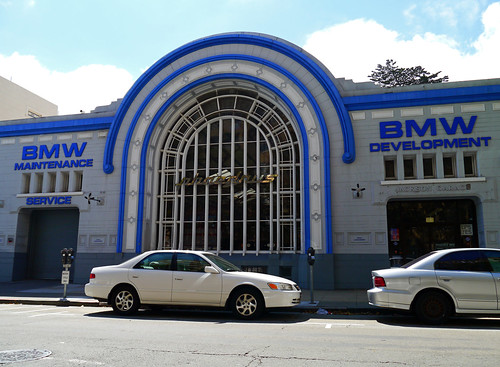 History:
This building was built in 1914 as an investment for the Thomas B. Bishop Company to designs by O’Brien Brothers, architects. Its primary use through 1945 was as a public garage, and it was named the Jackson Garage for most of that time. From 1946 through the present its primary use has been as an auto repair shop.

O’Brien Brothers had a diversified practice concentrating on industrial and commercial buildings, but also including many apartment buildings and residences. Auto related buildings were only a small percentage of their output, but it might be accurate to say that they made a specialty of designing this building type. O’Brien Brothers, in fact, probably designed more buildings for the automobile industry than did any other San Francisco architectural firm. Outside of the study area, their outstanding building of this type is the Palace Garage, at 111-127 Stevenson Street (1921). Other fine garage buildings by them include 1419 Pacific Avenue (1913-1914), 525 Jones Street (1922), and 640 O’Farrell Street (1924). Their Pickwick Hotel at 5th and Mission (1925) included a bus depot.

Within the study area, O’Brien Brothers designed two auto showrooms, at 1601 Van Ness (1912-1913; demolished) and 1600-1630 Van Ness (1913; partially altered), plus several public garages. The best of the garages are the Jackson Garage at 1641 Jackson (1914), 1660 Pacific (1921), the Grand Central Garage at 66 Page (1924), and the Kern Garage at 1700 Pine (1925).
These buildings were designed in prevailing styles such as Classical Revival and Tudor Revival that were adapted to automotive needs. Wide expanses of industrial steel sash windows allowed generous amounts of light for automotive work and gave these buildings a functional or industrial feeling that was enlivened by the historical ornament.

To recapitulate, approximately ten of O’Brien Brothers’ buildings for the automobile industry are known to still stand. Eight have high integrity, one lost its original window sash and doors but is otherwise fairly intact, and one has been altered more severely.

Occupants:
This building was named the Jackson Garage from 1914 through at least 1937 and perhaps to 1944. Raised letters reading “Jackson Garage” survived over two of the vehicle entrances into the 1980s, and one of these signs (over the westernmost entrance) still exists.

In sum, this building has had 31 years of public garage use fourteen years of auto repair use, for a total of 45 years of these uses combined (through 1964).