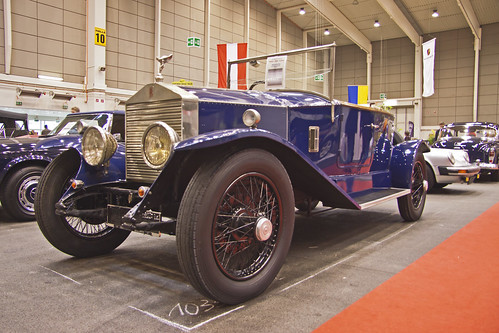 Special:
– In 1906, four chassis were built for the Olympia Motor Show. After a lot of interest from the public, manager Claude Johnson set one automobile (an open-top Roi-des-Belges body by coachbuilder Barker & Co. Limited, London) in “silver” (painted in aluminium paint with silver-plated fittings) and named it “Silver Ghost” by virtue of its appearance and “extraordinary stealthiness” (like a ghost).
– Chassis no. 60551, registered AX 201 (the 12th 40/50HP to be made), was the car that was originally given the name "Silver Ghost."
– That title was taken up by the press (the prestigious publication Autocar in 1907) and soon all 40/50HPs were called by that name, a fact not officially recognised by Rolls-Royce until 1925, when the Phantom range was launched.
– Proper production of the 40/50HP at Cooke Street, Manchester had not started until early 1907 after all the effort of preparing the first four motor cars for Olympia and the Paris show which followed.
– It has a centre-change four-speed manual gearbox , a cone type clutch, a Rolls-Royce carburettor, a 6-Volts electric system, dual ignition with coil and magneto and rear wheel drive.
– The chassis (partly steel and ash frame) has a walnut and highly varnished dashboard, leather upholstery, solid front axle with semi-elliptic leaf springs suspension,a live rear axle with cantilever leaf spring platform suspension, worm & nut steering, spoke wheels and internal expanding four-wheel mechanical brakes.
– Many rolling chassis were outfitted with luxurious bodies by some of the top coachbuilders in the industry, like Hooper, Barker, Park Ward, Thrupp & Maberly, James Young, H.J.Mulliner, Windover (London), Gurney Nutting, etc.
– A speed governor (cruise control) and four-wheel servo-assisted brakes (since 1923) were optional.