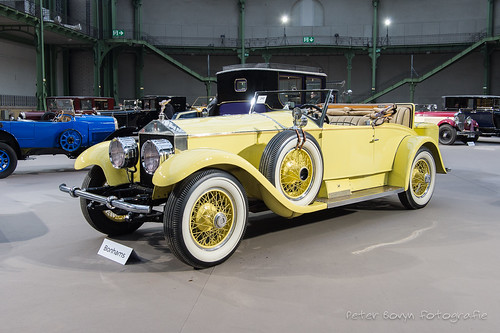 By the end of WWI, North America was the largest and most important car market, with more cars sold per annum in the USA than the rest of the world combined. Cars brought into the USA were subject to substantial importation taxes, so the Rolls-Royce management decided that in order to satisfy its customers’ demands at a more cost effective price, a manufacturing operation should set up on American soil. In 1919, the old American Wire Wheel Corporation plant on Waltham Avenue in Springfield, Massachusetts was purchased. As well as being an ideal location for supplying the New York and Boston markets, Springfield was also the centre of the United States’ coachbuilding industry, with an abundance of skilled labour.

By November 1919, Rolls-Royce of America Inc was formed, but it would be well into 1921 before the first US-built Silver Ghosts were ready to be sold. Unlike in the UK and Europe, where quality chassis were usually bodied by independent coachbuilders to the individual customer’s requirements, the United States market for luxury cars demanded they be supplied fully finished from the manufacturer. To compete with the local competition – principally Packard, Pierce-Arrow, and Cadillac – Rolls-Royce of America enlisted several of the local coachbuilding companies to supply ‘semi-custom’ bodies to standard designs under the ‘Rolls-Royce Custom Coach Work’ (RRCCW) programme. As one would expect of Rolls-Royce, the quality of the coachwork was first class; bodies were panelled in aluminium and with steel mudguards in most cases, quite different from the British style of construction.
One of the companies supplying bodies to Rolls-Royce of America at this time was Brewster, which would be taken over by Rolls-Royce in December 1925. As well as manufacturing coachwork of the highest quality, Brewster had built its own automobiles from 1915 up to the time of its acquisition by Rolls-Royce, re-emerging as an auto-maker in its own right, using Ford chassis, when US Phantom production finally ceased in 1934 and the company became part of the reconstituted Springfield Manufacturing Corporation.

Brewster’s coachwork of this period is rightly considered to be among the most stylish of all time, as exemplified here by this beautiful Playboy Roadster. It should be noted that Brewster’s Playboy Roadster coachwork was not officially offered as an option on the Silver Ghost; rather, it was intended as an alternative design to be fitted at a later date: usually once more formal coachwork had been removed and discarded. The Playboy Roadster was produced in strictly limited numbers, with just 15 bodies fitted to Silver Ghost chassis in total.

Chassis number ‘S306PL’ was completed in August 1926 fitted originally with a Pickwick saloon body to the order of Mr Kerr of New York. By the time this car was made it had become apparent that left-hand drive was essential for the North American market, an alteration to the Ghost chassis that necessitated the adoption of a new three-speed gearbox with central change. Four-wheel brakes likewise had come to be seen as a necessity rather than an indulgence, and would be standardised from 1924 on the British-built Ghost. A mechanical servo, driven from the gearbox, was used on the latter but the American version used the New Phantom front axle together with a Westinghouse vacuum booster.

‘S306PL’ remained in its original form until 1932 when it was returned to the factory, while still in Mr Kerr’s ownership, for the Playboy Roadster coachwork to be fitted (body number ‘B7293’). In 1937, the car changed hands for the first time when it was purchased by Mr Elliot Robertson, who owned the Alder Shoe Stores in New York City. The Rolls-Royce was next owned by Mr James Rainey of Milford, Connecticut from 1939 until 1947 when it was purchased by Dr Carl Beam, a professor of biology at Stanford University in California.
‘S306PL’ changed hands again in 1951 when purchased by Mrs Barbara Backmann of Pacific Grove, California, returning to Connecticut in a partially dismantled state in 1957 when acquired by Mr Walter Florian. In 1972 the Silver Ghost was purchased by Mr Arnold Haber of Nashville, Tennessee, who kept it until 1986. During Mr Haber’s ownership, the car was restored and then exhibited at the 1974 R-ROC Concours, winning first place in the Late Ghost Class; it was also judged at the 1977 Concours where it placed second in the same category.

In 1985, ‘S306PL’ was sold by Mr Haber to Mr Jack McKibbon of Gainesville, and shown again at the National R-ROC Meeting, held on this occasion in Toronto where it placed third in class. The final change of ownership prior to the current vendors’ acquisition occurred in 2002 when the Silver Ghost was purchased by a collector in Texas who restored the car in order to use it on long tours in the United States.

Since its arrival in the United Kingdom, the first time the car has ever left the United States, renowned marque specialists, Frank Dale & Stepsons have made the necessary cosmetic enhancements and conducted a thorough mechanical review to ensure reliability, correct performance, and continued enjoyment for the next fortunate owner. These works included, but were not limited to, an engine overhaul and refurbishment of the steering, brakes, and suspension. Related bills are available and the car also comes with a history file and US Certificate of Title.

Chassis number ‘S306PL’ is fitted with twin side-mounted spare wheels, a dickey seat in the rear deck, and a tail-mounted trunk containing fitted luggage, making the car ideal for touring. The Playboy Roadster by Brewster is a landmark design, highlighting all that was great about the production of Rolls-Royce motor cars in the United States, with this particular example being one of the best of the very few that survive today.