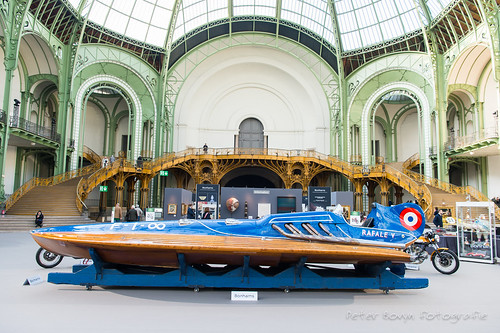 Anyone attending our viewing in the Beaux-Arts splendour of the Grand Palais will be able to study this majestic ‘tween-wars record breaking racing power boat beneath the exhibition hall’s vast 240-metres-long glass roof, which once shook to the roar of ‘Rafale V’s thunderous,36-litre, Hispano-Suiza V12 NBR aero engine as it powered ‘Rafale V’ at more than 130km/h along the River Seine outside.

in his publication ‘Classic Speedboats 1916-1939’ (Bay View Books, 1997) power-boat historian Gérald Guétat described how: "In France, the Tecalemit company was a major supplier of equipment for cars and aircraft. It was directed by Emile Picquerez, a great yachting enthusiast who ignored the barriers which normally separated sailing from motor boating. He had a large collection of both sailing and motor boats, among them some racing yachts of International class….as well as several large runabouts with two and three cockpits. Come winter or summer, his boats were to be seen at the Côte d’Azur or on the Seine. This businessman was behind a number of highly individual racers which allowed France to retain a presence in the great international classes up until the outbreak of war.

He continued: "Picquerez was the man who ordered the greatest single-engine racer built in France in the ‘unlimited’ class. Boats of this class were the only ones capable of breaking the world water speed record. France had not held the record since 1926 with the Farman hydroglider, and in contemporary times only the English and the Americans had really taken up the challenge…".

Picquerez’s great new unlimited-class power boat ‘Aurora’, named after his beautiful Argentinian wife, caused a sensation when unveiled to the public in July 1935. "Her elegant and powerful lines had been created by the engineer Galvin, a specialist in fast-boat hulls, whose name had been associated with the development of hydrogliders …"

Painstakingly custom-built by the leading Chauvière boatyard at Vitry-sur-Seine, ‘Aurora’s beautifully crafted double-diagonal mahogany planked hull was pinned together by thousands of countersunk copper rivets. It was 28-feet long and featured two hydroplane steps, stern-mounted rudder and a centreboard stabiliser. All metal parts were painted or chromium-plated. Galvin and Picquerez selected an Hispano-Suiza aero engine to power it, displacing no fewer than 2,196 cubic inches – 36-litres – and breathing through six double-bodied Hispano carburettors. The engine was specially developed for power boat competition by the Bois-Colombes-based manufacturer, under the technical supervision of Hispano’s brilliant chief engineer, Marc Birkigt, with subsequent preparation by Hispano technicians Guido Cattaneo and Gabriel Raget himself a very accomplished powerboat racer with world records to his name.

Chauvière also designed and built wooden aircraft propellers, and had been involved with Blériot’s records. Their construction of ‘Aurora’ was most robust – being aimed at endurance as much as pure speed Within Continental Europe, she was completely unique – and successful. In mid-summer 1936 – piloted by Picquerez himself – ‘Aurora’ won the President of the Republic’s prize at the Cannes Semaine Nautique, averaging 90.34km/h over the 12km course, and beating star rival Vasseur’s ‘Yzmona V’. Engineer Raget normally piloted this wonderfully Art Deco monster In July 1938 ‘Aurora’ became the only unlimited-class entry to compete in the Lyons-Marseilles-Cannes race which included both inland waterways and the open sea.

She was sold subsequently to Commodore Gerard who had her modified into current form to improve high speed stability, adding the Tricoloure Cockade to her tail and renamed her ‘Rafale V’ – ‘rafale’ meaning ‘gust’ in French, as of wind. In Gerard’s hands ‘Rafale V’ starred particularly in races and speed events in Monte Carlo, Paris and upon Lac Leman at Geneva.

The boat survived World War 2 hidden in a barge on the Seine and in 1965 was acquired by Robert, the Marquis de Goulaine, who then sold her to celebrated Vintage car and aeroplane collector/dealer Ed Jurist of Nyack, New Jersey, USA. She was shipped to America on board the SS Eurymachus, arriving on May 19, 1969. Ed Jurist associate George Huguely Jr then stored ‘Rafale V’ in a heated barn on his Fishing Creek Farm at Annapolis, Maryland, and it spent some time on display in Judge John C. North II’s private museum before, in November 1987, being offered for sale by Ed Jurist. She was then acquired by the present British vendor – in whose hands ‘Rafale V’ has been immaculately rebuilt preserving almost all of her original fabric. The engine has run in the last 10 years and has since had the valve seats replaced as required on one bank of cylinders., the gearbox internals look sound as do all the shaft bearings. The hull is in remarkable condition, bearing testament to how she has been looked after and stored throughout her lifetime.

‘Rafale’ is like a ghost from a time when Auto Union, Bugatti, Maserati and all the other great European marques powered race boats, piloted by the likes of Chiron, Nuvolari and Stuck. But as Ed Jurist said in ’69 ‘this boat is the mother of them all’.