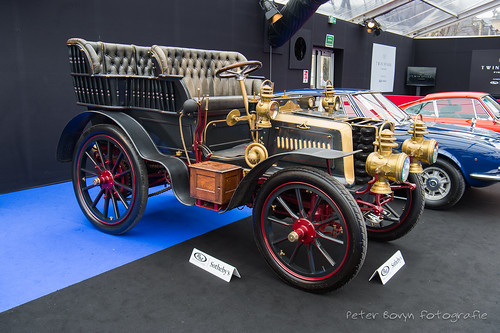 René Panhard and Émile Levassor built their first cars, a series of four identical models, in Paris during 1891. Other models followed in rapid succession, giving Panhard et Levassor the claim as first in continuous production, as opposed to Germany’s Daimler and Benz, whose early efforts came in ebbs and flows. With French colleagues and competitors Peugeot, Serpollet and De Dion, Panhard & Levassor constituted the world’s earliest automobile industry.

An early adherent to the front-engine, rear-drive configuration, Panhard was recognized by the application of the name Système Panhard to the layout, although another important ingredient, shaft-drive, was not universally adopted by the company until 1913. Panhard & Levassor were pioneers also with wheel steering (1896) and tubed radiators (1897). Chief engineer Arthur Krebs was also a pioneer in carburetion and electric ignition.

This handsome rear-entrance tonneau bearing chassis no. 2565 retains its original engine, with a new body, correct-type axels and chassis, and a four-speed gearbox recently manufactured to original specifications. It is believed to have spent the majority of its life in France before being purchased by its current British owner who commenced a full restoration to its current magnificent state.

Fitted with an electric starter motor and a modern oil pump for enhanced reliability and drivability, it is roadworthy on today’s roads . Accompanied by a set of FIVA papers, it remains eligible for a number of motoring events. The owner reports that it drives wonderfully, is easily capable of motoring along at 60 km/h and has adequate gearing to tackle hills with ease.

An imposing Edwardian motor car, this Panhard et Levassor represents one of the finest vehicles of its era and is fantastic value for a powerful four-cylinder example.