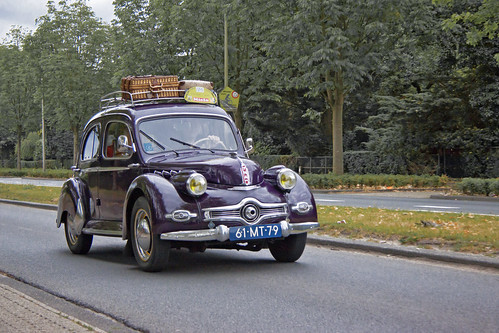 Special:
– The looks were up to date (modern and aerodynamic ), but technically ahead of its time, this Dyna, codenamed “Projekt AF-G (Aluminium Français – Grégoire), designed by engineer Jean-Albert Grégoire, was at first shown (the Panhard X 84) at the 1946 Paris Motor Show.
– The name "Dyna" was selected, a reference to the Panhard Dynamic before the war.
– Increasingly baroque body decoration led to the range being nicknamed "Louis XV".
– Panhard supplier Facel-Métallon, Paris developed a new process to manufacturer its all steel tubular frame chassis and the all aluminum body in pressed sheets.
– Until Ferrari came along with the Ferrari 360 (1999), it was the only production car to feature an all-aluminum chassis.
– The wheels have no hub. They are assembled by "ears" on the aluminum brake drums.
– The Dyna Series were available as this 4-door Berline, as 3-door Commerciale (with fixed side windows), as 3-door Break (with large sliding windows and a rear seat), as 2 -door Découvrable (Convertible), as 2-door Roadster (Dyna X Junior), as Fourgonette (a closed light Van), as 5-door Limousine, as 5-door Taxi and a rare 3-door Canadienne (a closed “Woody Van” (only 1949) and only 25 units built).
– A very special Dyna is Dynavia, a teardrop shape show/ studie model to study the possibilities of streamlining. Only 2 uinits built and only 1 still excists today.
– Citroën had a minority of 25% interest in Panhard since 1955 and took over the P&L Company in 1965 and let the car brand name "vanish" in 1967.