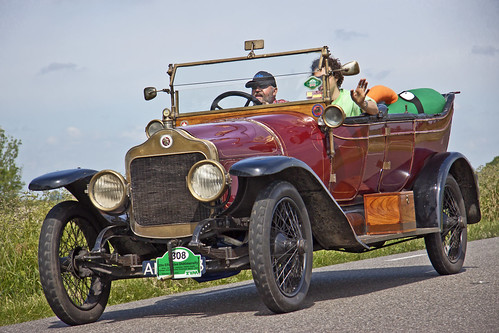 Special:
– It has a four-speed manual gearbox, a 68 liter fuel tank and rear wheel drive.
– The chassis with open body, designed by Dumas, Montpellier – France, has the famous Knight sleeve-valve engine, in addition to the primitive leaf springs Minerva had also shock absorbers and spiral-toothed angle gear at the rear axle.
– The Knight sleeve-valve engine, named after the American inventor of the design, Charles Yale Knight, works like this: The opening and closing of the valves was accomplished by slotted sleeves, which moved up and down within the cylinder bore, and within this the piston reciprocated. When the ports in the two sleeves aligned with the exhaust port, the exhaust cycle was underway. Intake worked according to the same principle. The action of the sleeves moving up and down was caused by a fairly conventional camshaft, which was acting on roller bearings that were affixed to arms that were attached to the bottom of each sleeve. The sleeve-valve design eliminated all the sources of mechanical noise at once, as the movement of well-lubricated sleeves up and down (with no sudden stops or starts) made no sound whatsoever. Other benefits included leaving the entire cylinder head area available to optimize its shape and the position of the spark plug. The downsize to the sleeve-valve design was the oil consumption, particularly if the car was unused for a period of time. Fortunately, as the engine acquired mileage, carbon buildup on the inner and outer surfaces of the sleeves caused them to seal better as time went on, resulting in it consuming less oil, not more.
– The sleeve-valve engines were licensed to many of the top automakers including Daimler in England, Panhard et Levassor in France, Mercedes in Germany, and, of course, Minerva in Belgium, among others.
– Minerva was known for its luxurious, well finished, fast, customized cars. The Minerva brand name was similar to Rolls-Royce. Soon knew the well-off part of the world Minerva: members of the royal families of Belgium, Norway, Sweden, Romania, Thailand and India, people of nobility, celebrities and major business leaders such as Henry Ford, artist Anna Boch drove around in a Minerva from Antwerp.
– In 1911, Minerva was the largest factory of Belgium with 1600 staff members.
– The mascot with the head of the Roman goddess Minerva on the radiator was designed by Pierre de Soete, but only just in 1922.
– In the early years Charles Rolls was Minerva dealer in London.