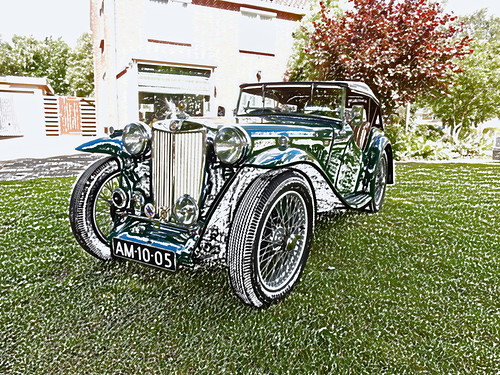 Special:
– The new TA was lower, wider, more spacious and has a more comfortable cockpit than its predecessor, the PB, but still many components borrowed from Morris. The production of these sports cars was concentrated at a factory in Abingdon.
– When first introduced, this bench-type two-seater vehicle with cut-out doors, folding windscreen, a tall, square radiator, (known as the T Type and only after the advent of the TB did the TA designation come into use), could be purchased in open and closed configuration.
– Later, the open coupé, referred to as an Airline Coupé by Carbodies Limited in Coventry (but only one or two is thought to have been made), was replaced with a Drophead style, using a soft-top.
– There was also a successful Tickford embodiment by Salmons in Newport Pagnell, 252 units built of which presumably only a dozen survivors.
– The Cream Cracker Team became three factory TAs with the 1600cc engine of the larger MG VA Tourer in 1937, being very successful in the hill climb races that season.
– Allan Tomlinson won the 1939 Australian Grand Prix driving an MG TA.
– The T-Series became the icon of British Sports Cars.