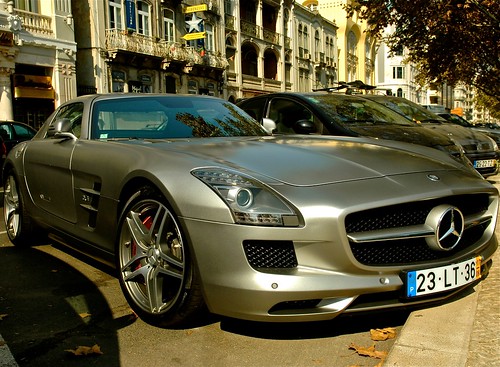 The SLS AMG is designed to be a modern 300SL Gullwing revival by Gorden Wagener. The car has a long bonnet, the passenger compartment is close to the rear axle and the rear of the car is short. The SLS AMG has also adapted the feature of wing doors that will swing open upwards on gas struts, not in a mix of upwards and forward like the SLR. The doors must be closed manually as AMG engineers decided against auto-closing systems because the systems would have added 90 pounds (41 kg) to the car.[4] In case of a roll-over, the doors can be fully detached to allow the occupants to leave the vehicle.
[edit]Versions

The SLS AMG will be made in at least four different versions. The first to launch is the coupe with gullwing doors. In 2009 a Desert Gold version debuted at the Dubai International Auto Show, in mid-2010 a FIA-GT3 racing version. For 2011-2013 Mercedes will also be releasing a roadster (with conventional doors and a soft top), an electric powered E-Cell version (most likely to be a coupe), and there will be a Black Series version, which will see its weight being reduced by as much as 300 kg (661 lb).

SLS AMG GT3
A GT3-spec racing version of the SLS AMG was unveiled at the 2010 New York Auto Show. It is set to compete in national GT3 championships before being allowed race in the FIA GT3 Championship in 2011.[6] At VLN Nürburgring, the SLS AMG GT3 was admitted into the SP9 class with "Balance of Performance" set to 1350 kg and 556 PS,[7] and won its first race in October.[8]
25 SLS AMG GT3’s were built for competition with only one not racing in Europe. Erebus Racing who race in the Australian GT Championship run the car which is driven by Peter Hackett who is also the Chief Instructor at the Australian Mercedes Benz Driving Academy.[9]
[edit]SLS AMG "Blackbird"
The SLS AMG "Blackbird" was a unique, special edition SLS AMG created by Mercedes-Benz’s Australian subsidiary specifically for the 2010 Australian International Motor Show. The one-off vehicle was eventually sold to a private customer from Singapore.[10]
[edit]SLS AMG E-Cell
The SLS AMG E-Cell is planned for model year 2013 and will use all-electric powertrain components. It will include four electric motors (one on each wheel) with combined ratings of 392 kW (525 bhp) and 880 N·m (650 lb·ft), liquid-cooled 400V lithium-ion battery rated 48 kWh and a capacity of 40 Ah. The battery will be supplied by Deutsche Accumotive GmbH & Co. KG, a joint venture between Daimler AG and Evonik Industries AG.[11][12] Mercedes-Benz anticipates selling the vehicle beginning in late 2012.[13]
[edit]SLS AMG Roadster
The SLS AMG Roadster was unveiled by Mercedes-Benz via press release on May 5, 2011. It retains the same specifications, dimensions and drivetrain as the Coupe but is a more traditional convertible with a power folding fabric top and conventional doors.[14]
[edit]Specifications

The fuel consumption of the SLS AMG is around 13 L/100 km (22 mpg-imp; 18 mpg-US) combined driving according to (NEDC, provisional figure).