The Mercedes-Benz W136 was Mercedes-Benz’s line of four-cylinder automobiles from the mid-1930s into the 1950s. The car was first presented in public in February 1936, although by that time production had already been under way for a couple of months. Between 1936 and 1939, and again between 1947 and 1953 […] 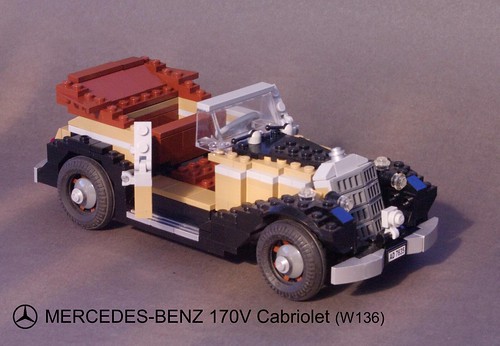 1955 was the car’s last year of production. Its replacement, the W120 had already been on sale since July 1953, after which the older model was repositioned in the market as a lower priced alternative to the new one.

The "V" in the 170V’s name was short for "Vorn" (front) and differentiated the car from the contemporary Mercedes-Benz 170H (where "H" was short for "Heck" or rear) which used the same four cylinder 1697cc engine, but positioned at the back of the car.

Claimed maximum power output was 28 kW (38 PS) at 3,400, using a compression ratio (during the car’s early years) of 6:1. The side-valve four cylinder engine consumed fuel at the rate of less than 10 litres per 100 kilometres (28 mpg-imp; 24 mpg-US). The motor was attached using just two mountings and ran with a smoothness hitherto unknown in a four cylinder unit.

Power was delivered to the rear wheels via a four speed manual transmission which initially came with synchromesh only on the top two ratios. However, in 1940 the transmission was upgraded after which synchromesh was incorporated for all four forward ratios.

Both the foor door bodies were also available adapted for taxi work, with large luggage racks at the back. There was a two door two seater "Cabriolet A" and a two door four seater "Cabriolet B" both with luggage storage behind the seats and beneath the storage location of the hood when folded (but without any external lid for accessing the luggage from outside the car). A common feature of the 170V bodies was external storage of the spare wheel on the car’s rear panel.

The two seater roadster featured a large flap behind the two seats with a thinly upholstered rear partition, and which could be used either as substantial luggage platform or as a very uncomfortable bench – the so-called mother-in-law’s seat.

In addition to the wide range of passenger far bodied 170Vs, a small commercial variant was offered, either as a flatbed truck or with a box-body on the back. Special versions of the 170V were offered, adapted for use as ambulances or by the police, mountain rescue services and military.

During the war the Mercedes-Benz plant suffered very severe bomb damage, but the manufacturer nevertheless emerged from the trauma of war with a significant competitive advantage over many of its pre-war competitors. Manufacturers including Adler, BMW and Ford in Germany had been heavily dependent for the supply of steel car bodies on Ambi-Budd whose Berlin plant was destroyed by bombing in 1943: its site now ended up in the Soviet occupation zone (subsequently East Germany). The manufacturing plants of Horch, Wanderer and BMW were located in what in July 1945 became the Soviet controlled part of Germany. None of these manufacturers could resume volume production without first finding a way to obtain and fund a source of steel car bodies and access to a suitable plant for auto-assembly. Mercedes-Benz, however, retained ownership of and access to its car plant.

Production restarted in May 1946. The vehicles produced were versions of the 170V, but in 1946 only 214 vehicles were produced and they were all light trucks or ambulances. Passenger car production resumed in July 1947, but volumes were still very low, with just 1,045 170Vs produced that year. There was no return for the various open topped models from the 1930s. Customers for a Mercedes-Benz 170V passenger car were restricted to the four door "Limousine" sedan/saloon bodied car.

Production did ramp up during the next couple of years, and in 1949 170V production returned to above 10,000 cars. From May 1949 the car, badged in this permutation as the Mercedes-Benz 170D, was offered with an exceptionally economical 38 PS (28 kW; 37 hp) diesel engine. The 170D was the world’s third diesel fueled passenger car, and the first to be introduced after the war.

This Lego miniland-scale Mercedes-Benz W136 170V Cabriolet has been created for Flickr LUGNuts’ 84th Build Challenge, our 7th birthday, to the theme, – "LUGNuts Turns 7…or 49 in Dog Years", – where all the previous build challenges are available to build to. In this case one of the very early challenges, Challenge 11, – "Colour me Strange", – an opportunity to explore some of the rarer areas of the Lego Group’s colour palette. The Mercedes-Benz 170V shown here features bodywork in the ‘dark tan’ colour, complemented with black fenders and running boards, along with ‘reddish brown’ interior and cabriolet hood.