W186 ‘A Continental test on a (Mercedes-Benz 300) production model recently made available by the manufacturers shows that the car now challenges the best produced anywhere in the world today. There are still very few saloon cars which are capable of a mean speed of over 100mph, but to obtain […] 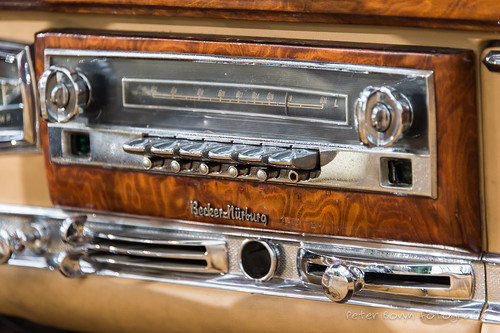 ‘A Continental test on a (Mercedes-Benz 300) production model recently made available by the manufacturers shows that the car now challenges the best produced anywhere in the world today. There are still very few saloon cars which are capable of a mean speed of over 100mph, but to obtain this result on a five/six-seater saloon car with generous room for passengers and luggage, using an engine of three-litre capacity said to deliver only 114 bhp, is a notable achievement.’ – The Autocar magazine, May 1952.

Introduced at the Frankfurt Auto Show in 1951, the Mercedes-Benz 300 owed the design of its independently suspended oval-tube chassis to the 170S of 1949 and would later on provide the mechanical basis for the incomparable 300 SL sports car. Additional refinements appropriate for the company’s top-of-the-range luxury saloon included an improved steering mechanism and remote electrical control of the rear suspension ride height. Initially developing 115 bhp (DIN), the 3-litre, overhead-camshaft six-cylinder engine was increased in power for succeeding models, producing 125 bhp in the 300b built between March 1954 and August 1955. Other improvements included larger brakes (with servo-assistance from 1954) optional power steering and three-speed automatic transmission as standard on the 300d. Conservatively styled, the Mercedes-Benz 300 was one of very few contemporary vehicles capable of carrying six passengers in comfort at sustained high speeds. Priced at DM 24.700 in 1954, the 300b Cabriolet D was among the world’s most expensive – if not the most expensive – automobiles of its day.

‘To the characteristics of high performance, impressive appearance and fine detail finish which distinguished the big Mercedes models of pre-war days are added new virtues of silence, flexibility and lightness of control, while the latest rear suspension, a product of long experience on Grand Prix cars and touring cars, confers a degree of security at high speeds on rough and slippery surfaces which it would be very difficult indeed to equal,’ observed The Autocar.

A most worthy upholder of the Grosser Mercedes tradition of pre-war years, this rare Cabriolet D is one of only 181 of its type built on the 300/300b chassis during 1953 out of a total convertible production of 591. The car was purchased from Kansas, USA in 2001 and brought to Spain where it was professionally restored from the ground upwards – with no expense spared and using original Mercedes-Benz parts – by Moret Clásicos of Villalba, Madrid. The total cost was at least € 90.000.

There is a detailed estimate in the accompanying file, which also contains a US title, shipping documentation, Spanish registration papers, and photographs of the restoration. Following completion in 2004, the car was exhibited at Techno Classica Essen. Only some 1.500 kilometres have been covered since the rebuild and this beautiful Mercedes-Benz soft-top remains in commensurately excellent condition.