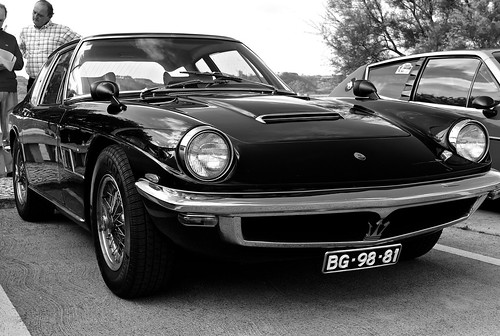 The Mistral is the last model from the "Casa del Tridente" or “House of the Trident” to have the famous straight six cylinder, twin-spark, double overhead cam engine, as fitted to the Maserati 250F Grand Prix cars that won 8 Grand Prix between 1954 and 1960 and one F1 World Championship in 1957 driven by Juan Manuel Fangio. The engine also featured hemispherical combustion chambers and was fed by a Lucas indirect fuel injection system which was novelty at the time for Italian car manufacturers. Although the Lucas fuel injection system enhances performance, quite a few owners, especially in the U.S. have converted their cars to Weber carburetors due to difficulties in tuning the system properly. Maserati subsequently moved on to V8 engines for their later production cars. There were three engine variants fitted to the Mistral; 3500, 3700 and 4,000 cc. The most sought after derivative is the 4000 cc model. Only the earliest of the Mistrals were equipped with the 3500 cc engine. Unusually, the body was offered in both aluminum and steel but no one is quite sure as to how many of each were built. Use of the aluminum body panels had no effect on the performance of the Mistral. The mixture of the aluminum body on a steel substructure can lead to corrosion due to the dissimilar metals. The automobile was standard with a five speed transmission from ZF and also had four wheel solid disc brakes. As was Maserati’s practice at the time the front suspension was independent while the rear made do with a solid axle. Speed for the 3.7 liter engine and the 4.0 liter engine was around 7 seconds or a little better and the top speed was around 140 mph (225 km/h) to 145 mph (233 km/h). When leaving the factory the Maserati Mistral originally fitted Pirelli Cinturato 205VR15 tyres (CN72).

The body which had been designed by Pietro Frua was first shown in a preview at the Salone Internazionale dell’Automobile di Torino in November 1963. The Maserati Mistral is generally considered as one of the most beautiful Maserati of all time. It is also often confused to the very similar looking but larger and more powerful AC Frua, which was a Frua design as well.