Follow @stevejamesphoto www.steven-james-photographic-services.co.uk/ In order to boost Sunbeam’s image, a "hot hatch" version of the Sunbeam was launched at the 1978 British International Motor Show and Paris Motor Show, called Sunbeam Ti.[7] It was based on the former Avenger Tiger (itself hailing back to the Sunbeam Tiger), a sporty version […] 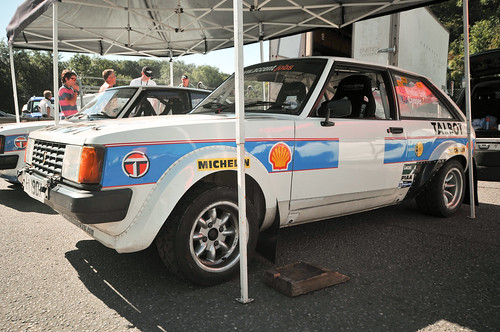 In order to boost Sunbeam’s image, a "hot hatch" version of the Sunbeam was launched at the 1978 British International Motor Show and Paris Motor Show, called Sunbeam Ti.[7] It was based on the former Avenger Tiger (itself hailing back to the Sunbeam Tiger), a sporty version of the Avenger. The 1.6-litre (1598cc) engine fitted to the Sunbeam with twin Weber carburetors delivered 100 bhp (75 kW; 101 PS). It featured sporty two-tone paint and body kit, and was very sport-oriented, being stripped of equipment that would compromise its performance (and image). It proved quite popular with reviewers and enthusiasts, and helped to emphasize the advantages of Sunbeam’s rear-wheel drive against more trendy (and spacious) front-wheel drive rivals.

Tony Pond driving his Talbot Sunbeam Lotus at the 1979 Manx International Rally.
Chrysler had also commissioned the sports car manufacturer and engineering company Lotus to develop a strict rally version of the Sunbeam. The resulting Sunbeam Lotus was based on the Sunbeam 1.6 GLS, but fitted with stiffer suspension, larger anti-roll bar and a larger transmission tunnel. The drivetrain comprised an enlarged 2172 cc version of the Lotus 1973 cc 907 engine, a 16V slant four engine (the Sunbeam version being type 911, similar to Lotus 912), along with a ZF gearbox, both mounted in the car at Ludham airfield close to the Lotus facility in Hethel, Norfolk, where the almost-complete cars were shipped from Linwood. Final inspection, in turn, took place in Stoke, Coventry. In road trim the Lotus type 911 engine produced 150 bhp (112 kW; 152 PS) at 5,750rpm and 150 lb·ft (203 N·m) of torque at 4,500rpm. In rallying trim this was increased to 250 bhp (186 kW; 253 PS).
The Sunbeam Lotus was unveiled at the Geneva Motor Show in April 1979, but the road-going version of the rally car was not actually ready for deliveries to the public until after the rebranding, and thus became the Talbot Sunbeam Lotus. At first these were produced mostly in black and silver, although later models came in a moonstone blue and silver (or black) scheme. The car saw not only enthusiastic press reviews, but also much success in the World Rally Championship – in 1980, Henri Toivonen won the 29th Lombard RAC Rally in one, and in 1981 the Sunbeam Lotus brought the entire Manufacturer Championship to Talbot.