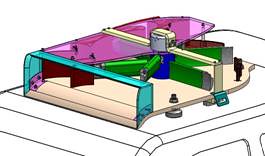 This invention is related to wind turbines that use the wind to create  energy. The primary application of
this invention will be in charging the batteries of an automobile when it is in motion. The batteries thus charged can be used to run the vehicle and its accessories.
The increased use of gasoline for powering automobiles has raised concern for environmental issues such as pollution, global warming, depletion of ozone layer, and so on. In an effort to address these issues, Prof. Tickoo of Purdue University has invented a device called ‘Tickoo Wind Turbine’ that will be mounted at the top of the vehicle to generate continuous supply of power.

The device is designed such that when the vehicle moves, especially at moderate to high speed, the wind will
enter the turbine with high kinetic energy from the front in the horizontal direction and strike the blades
of the wind turbine. This will make the blades rotate at high RPM. In this device, the blades are mounted on
the rotor coupled with the generator/alternator through a shaft. The power thus generated will charge the
batteries.

This wind turbine contains mechanisms that deflect the wind toward the desired area of the turbine and over a larger angle. Also, the drag component of the wind force is drastically reduced and its design helps maximize the utilization of the wind.

The wind turbine will generate power and charge the batteries even if the vehicle is parked, provided there is sufficient wind to rotate the turbine blades.

If more power is needed, the width of the turbine blades can easily be increased. Any increase in the turbine blade width will create greater torque and therefore more power.
The scaled up version of this wind turbine can be fitted under the trucks that have sufficient ground clearance to accommodate it.

It can also be used to produce the power for home use by mounting the turbine on a tall structure like a turbine tower. Several turbines can be mounted on the same structure to produce more power economically.

The unused power that is accumulated in batteries can be converted into 110V with an inverter and sold to the utility companies or used at home.

As the equipment used in this design are inexpensive, the manufacturing cost will be significantly low.

About the Inventor
This turbine has been invented by Prof. Sham Tickoo. Sham Tickoo, Professor in the Department of Mechanical Engineering Technology at Purdue University Calumet, USA. He has been teaching CAD/CAM, AutoCAD, AutoLISP, drafting, and design since 1981. Apart from his academic career, he has worked as a machinist, quality control engineer, design engineer, and software developer. Prof. Tickoo received his M.S. in Industrial Technology from Northern Illinois University and M.S. in Industrial and Management Engineering from University of Iowa, Iowa City. His general research interests are in the design and development of new products like wind turbines. Prof. Tickoo has authored/coauthored several books like AutoCAD, CATIA, NX, and so on.