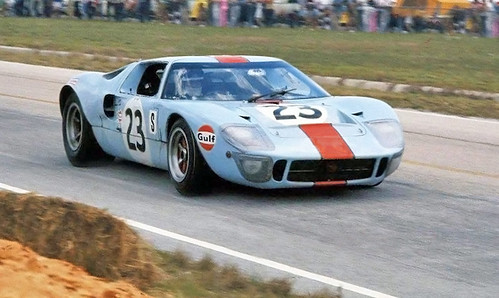 J.W. Automotive fielded two Gulf Ford GT40’s at Sebring in 1969. Both cars were considered to be ancient by racing standards but the team would win with the #22 GT40 driven by Jacky Ickx and Jackie Oliver. The #23 team GT40 in this photo was driven by David Hobbs and Mike Hailwood but failed to finish due to a broken front suspension. Suspension breaks were not uncommon at Sebring back then. On the back airport straight the expansion joints on the large concrete pads would rise up just a little when it was hot and some drivers described driving over them, at speed, as if they were driving over 2×4’s for almost a mile. Fotografo Sconosciuto.