A pair of BSA Bantam 125cc motor cycles used by the GPO to deliver mail in the UK. The General Post Office later became Royal Mail. From Wikipaedia: The Birmingham Small Arms Company Limited, BSA was a major industrial combine, a group of businesses manufacturing military and sporting firearms; bicycles; […] 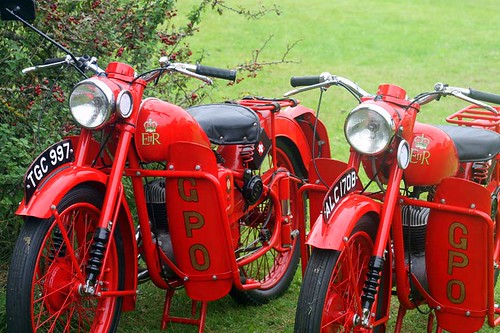 A pair of BSA Bantam 125cc motor cycles used by the GPO to deliver mail in the UK. The General Post Office later became Royal Mail.

At its peak, BSA was the largest motorcycle producer in the world. Loss of sales and poor investments in new products in the motorcycle division, which included Triumph Motorcycles, led to problems for the whole group.

A government organized rescue operation in 1973 led to the takeover of remaining operations by what is now Manganese Bronze Holdings, then owners of Norton-Villiers, and over the following decade further closures and dispersals. The original company, The Birmingham Small Arms Company Limited, remains a subsidiary of Manganese Bronze but its name was changed in 1987.