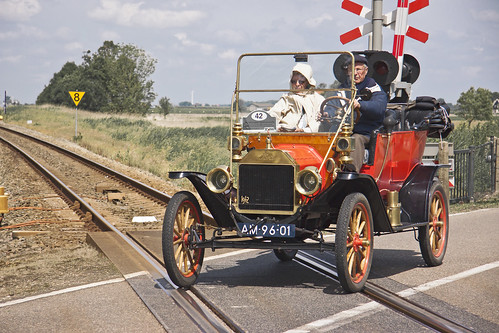 Special:
– On October 1, 1908, the company introduced the successful Ford Model T (also known as Tin Lizzie, Tin Lizzy, T‑Model Ford, Model T, or T), designed by Childe Harold Wills, Joseph A. Galamb and Eugene Farkas,
– At first assembled in Piquette plant and from 1910 in the Highland Park plant.
– It was Fords first mass production car (instead of individual hand crafting). The chassis was drawn by workers on a carriage trough the factory. Later, the sleds were replaced by carts on rails and mechanically drawn ("electric lines").
– This was not the first production line with completely interchangeable parts ever (that was Olds Motor Works, Lansing, Michigan – USA with the Model R Curved Dash), but it was the first time an entire plant worked with this system.
– The bodies were still to 1919 from other manufacturers, notably OJ Beaudette and Kelsey.
– It was Americas first automobile with standard left hand steering, while driving on the right was "the right way".
– The ignition system used an unusual trembler coil system to drive the spark plugs (used only for stationary gas engines) but made the T more flexible to use a range of fuels, like gasoline, kerosene or ethanol.
– The Ts in-line engine was the first engine with a removable cylinder head.
– The transmission is a standard two-speed planetary unit with a magneto located in front of the flywheel. This magneto supplied ignition current generated in a set of stationary coils.
– One had to have special driving techniques in order to keep the planetary gearing under control. So in many States you needed an extra / special driver’s licence.
– The early models had a foot-operated transmission brake and hand-operated rear wheel mechanical drum brakes.
– An option were the "Rocky Mountain Brakes", additional external band brakes only on the rear axle.
– The parking brake works on the tie rods to the drum brakes on the rear axle.
– The suspension employed a transversely mounted semi-elliptical spring for each of the front and rear beam axles which allowed a great deal of wheel movement to cope with the dirt roads of the time.
– The Model T’s built prior to 1919 were supplied with non-demountable wheels. This meant that if a flat tire occurred, the tire had to be removed from the rim and a new tube installed. In 1919, demountable wheels were available which allowed for a spare rim with the tire attached to be carried.
– The wheels were wooden artillery wheels with pneumatic clincher type tires, with steel welded-spoke wheels available in 1926 and 1927.
– Balloon tires with steel wires reinforcing the tire bead became available in 1925.
– Henry Ford: “Any customer can have a car painted any color that he wants so long as it is black”.
– He was constantly telling this joke, because their was only one colour quick enough to dry in the fast production, and that colour was Japanese Black.
– The drying time shorten rapidly in 1926, when they start to use the new "Duco lacquer".
– However, in the first years of production from 1908 to 1913, the Model T was not available in black ☺☺! but rather only grey (only for town cars), green (touring cars, town cars, coupes and Landaulets), blue, and red (only for the touring cars).
– By 1912, all cars were being painted midnight blue with black fenders.
– In 1914 a complete Model T was built in only 93 minutes!!, i.s.o. 12 hours and 30 minutes.
– By the end of 1913, Ford had a market share of 50% in the U.S., and in 1918 was half of the vehicles on U.S. roads a Ford Model T.
– Ford had his own forests (for timber) and garnet quarries (for sharpening the window glass).
– The Ford Model T was the first automobile global built in Detroit (USA), Highland Park (USA), Minneapolis (USA), St. Paul (USA), Dothan (USA), Buenos Aires (Argentina), Geelong (Australia), São Bernardo do Campo (Brazil), Toronto, Ontario (Canada), Walkerville, Ontario (Canada), Copenhagen (Denmark), Manchester (England), Berlin (Germany), Cork (Ireland) and Cádiz (Spain).
– The T-model range was very large: Town Cars, Sedans, Landaulets, Convertibles, Open Tourer, Touring (like this one), Roadsters, Open Runabout Speedsters, 2 seaters, 4 seaters, Coupes, Sport Coupes, Coupelets, Torpedo Runabouts, Delivery Cars, C-cab wagon (1912) etc., even military vehicles.
– Separate chassis ("rolling chassis") were available all years for independent coachbuilders.