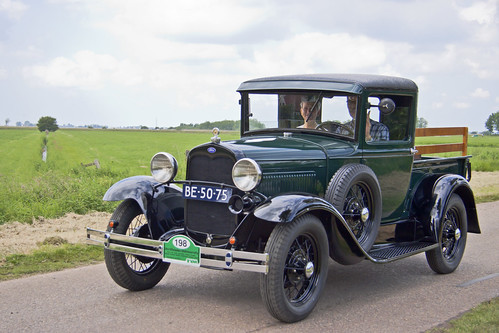 Special:
– By switching production in 1927 from Model T to Model A, there were major delays.
– The A (also called A-Model Ford or the A, and A-bone among rodders and customizers) is a simple design with a L-Head 4-cylinder side-valve engine, Zenith carburettor, a three-speed manual gearbox (+ reverse), rear wheel drive and the traditional Ford suspension with transverse semi-elliptic leaf springs with Houdaille-type double-acting shock absorbers.
– The exterior has design cues taken from the Lincoln ("baby Lincoln"), heavily involved by Edsel Ford.
– The model was available in 30 body styles (icluding this Pick-Up Truck) and four standard colours, but not in black☺! Black however was an option.
– In contrast, the fenders were always painted black for manufacturing reasons.
– The Model A was the first Ford to use the standard set of driver controls with conventional clutch, throttle, gearshift and brake pedals.
– It was Fords first standard automobile with a new battery and ignition system, safety glass in the windshield and mechanical drum brakes on four wheels (cable operated).
– The A had a comfortable "dickey-seat" (in America "rumble seat"), in the earlier "coach period" intended for the footman. If it was not used, it could be folded shut.
– The 1930 and 1931 editions came with stainless steel radiator cowling and headlamp housings.
– The fuel tank was located in the cowl, between the engine compartment’s fire wall and the dash panel (with visual fuel gauge).
– The truck model was called Model AA. It had a longer chassis, strengthened suspension with steel instead of spokes wheels and dual tires for the heavier versions.
– The first station wagon was built by Stoughton Wagon Company in Stoughton, Wisconsin (USA) in 1919, mounted on a Ford Model T, because farmers (the first users) preferred them.
– Ford came with the first standard model "Woodie" based on a A Model in 1929. These body works were produced by Briggs in Detroit.
– In 1932 Ford surprised everyone by introducing a very cheap V-8 engine.
– The Model A formed the basis for the Russian car industry (Gorkovsky Avtomobilny Zavod (NAZ/GAZ) in Nizhny Novgorod)
– These early station wagons had different names, like "depot-wagons" or "hacks".
– Outside of the USA, the Model A was produced in plants in Argentina, Australia, Canada, Denmark, France, Germany, Ireland, Soviet Union and the United Kingdom and sold all over the world.

Photographed in Gaasterland, Fryslân – The Netherlands ☺!