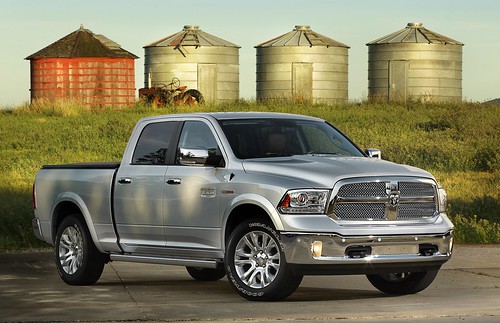 The Ram truck completed the year with 293,363 units — I’d be surprised if that total doesn’t rise in 2013 with a full year of the refreshed full-size pickup.

The Ram Truck brand was the highest ranking non-premium brand in the APEAL Study. Premium brands traditionally rank higher in the APEAL study and hold the top 10 rank position in this year’s study.

WHY BUY ANY OTHER TRUCK?

The Ram 1500 is the 2013 Rocky Mountain Truck of the Year, as chosen by the Rocky Mountain Automotive Press, for class-leading ride and handling, expansive interior, and blend of toughness and refinement. Journalists found the available air suspension and eight-speed transmission particularly suited to Colorado’s unique driving challenges. "On-road and off, it’s the perfect truck to tackle the demands of the Rocky Mountain West," said RMAP president Chuck Giametta.

2013
North American Truck of the Year

Among the best in the heart of Motor City, the 2013 Ram 1500 drove away with the title of 2013 North American Truck/Utility of the Year. Upon receiving the award at the International North American Auto Show in Detroit, Ram brand CEO Fred Diaz told USA Today that it "feels like a three-point buzzer beater." He credited the major push for an innovative new model to (Chrysler and Fiat CEO) Sergio Marchionne "telling us ‘Boys, it’s time to go big or go home.’"

The 2013 Ram 1500 proudly accepts its title as Truck of the Year®, undeniably one of the automotive industry’s most prestigious honors. Motor Trend heralds the Ram brand for standing apart from the competition, as the light-duty lineup of Ram trucks is "refining its powertrain options by offering more efficient engines bolted to a new, optional eight-speed transmission". The distinguished publication also calls out the truck’s array of innovative features, as well as the "much-celebrated" 3.6L Pentastar® V6, offering 42% more horsepower and 13% more torque than previous models.

The new Ram 1500 is making a name for itself on the road and on the airwaves. Ruedas ESPN, the leading Spanish-language automotive radio show, named the 2013 Ram 1500 its Truck of the Year. Jamie Florez, Director and Host of Ruedas ESPN, cited it as an example of a vehicle being both attractive and efficient. With its Best-in-Class 25 HWY MPG+ and improved exterior details, it’s hard to argue.

It’s no surprise that the 2011 Ram 1500 was named to the prestigious Automobile magazine All-Stars list. A repeat winner, the Ram 1500 was honored for both its Best-in-Class driving dynamics and its array of comforts. Editors noted that the truck’s cabin "excels in attention to detail," and that its hand-crafted interior compliments other crew cab storage features, like in-floor bins and the handy available RamBox® Cargo Management System.

Off-Road Adventures magazine named the RAM brand its MANUFACTURER OF THE YEAR, calling our 2011 lineup "one of the most innovative lineups of full-size trucks on the market… with great looks, refined interiors and durable engines." We couldn’t agree more. We pride ourselves on making trucks, and making them better year after year. The result? A new lineup of fully-loaded pickups, with refined interiors, ample storage space and modern conveniences.