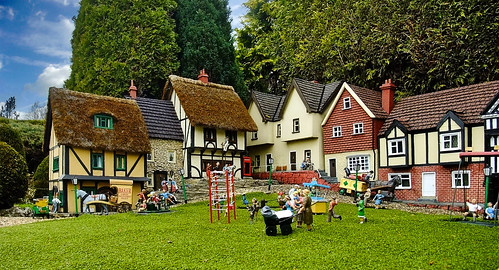 Bekonscot in Beaconsfield, Buckinghamshire, is the oldest original model village in the world.

The Model Village actually comprises six little towns stuck in a 1930s timewarp. Bekonscot Town is the biggest, with the others scattered about the other 1.5 acres of gardens. Each has its own character, villagers and features – from coal mines to great castles, aerodromes to farms, docks to cable cars, racecourses to escaped convicts!

There are more than 200 buildings, 3,000 inhabitants, 1,000 animals, hundreds of vehicles and many models move right before your eyes.

It portrays aspects of England mostly dating from the 1930s. Bekonscot has been run by the Church Army since 1978 and donates large amounts of money to charity. It has raised the equivalent of almost £5,000,000 so far and has been visited by more than 14,000,000 visitors.

Bekonscot was first created by Beaconsfield resident, accountant Roland Callingham (1881–1961), in the 1920s. Roland developed the master plan for his miniature empire as an addition to his large back garden, drawing in help from his staff: the gardener, cook, maid and chauffeur. Together they developed the model landscape portraying rural England at the time. The swimming pool became the first "sea" and the undulating rockeries were built up as hills. Bassett-Lowke, the large-scale model railway manufacturers, were commissioned to build an extensive Gauge 1 railway network for the project. Callingham named the village ‘Bekonscot’ after Beaconsfield and Ascot where he previously lived.

It was not conceived as a commercial visitor attraction but as a plaything to entertain Roland and his guests. It was only after 1930 that its existence became widely known, catching the imagination of the press and public alike. Frequent newsreels such as Pathé, international and national newspaper coverage ensured a steady stream of visitors, all of whom were invited to make a donation to the Railway Benevolent Institution.