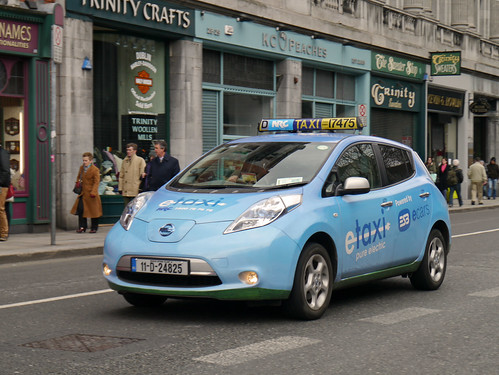 Not something you see everyday: 2011 Nissan Leaf "e-taxi".

Dublin’s electric taxi has saved taxi driver, Padraig Daly, approximately €6,500 over the last 18 months. The 100% electric Nissan LEAF which has been part of a trial between ESB ecars and National Radio Cabs (NRC) has clocked up over 55,000km on Dublin roads. The trial, to evaluate electric vehicles as part of the taxi industry, has been deemed so successful that it will be extended for another year.

Analysis shows that savings of up to 12.9 cent per km can be achieved by driving an electric vehicle, powered by night rate electricity, in comparison with a conventional car. For 55,000km, this would equate to fuel savings of over €6,500 and a net reduction in over four tonnes of CO2 emissions.

In addition to the fuel and emission savings, electric vehicles also benefit by availing of a government grant of up to €5,000 on the purchase price, qualifying for the lowest band of road tax (€120 per annum), and from significantly lower maintenance and service costs. Over the 18 months, services costs experienced by the e-Taxi were minimal. The ecar can be re-charged at night at the taxi driver’s home through a dedicated home charge-point, allowing him to avail of low night rate electricity tariffs. He can also easily charge during the day at any of the on-street charge-points around Dublin city which have been installed by ESB.

Manager of ESB ecars, Dermot McArdle said: “Ireland’s first e-Taxi trial has been a huge success and we are delighted in conjunction with our partners, NRC Taxis, to extend it by another year. The long term trial in a real life environment endorses the suitability of Electric Vehicles as both taxis and for the general public. To support electric vehicles, ESB is continuing to roll out a growing network of public charging infrastructure. In Dublin alone, there are over 120 public charge-points including ten fast chargers.”

“The e-Taxi has proved really popular with passengers,” said Padraig Daly of NRC Taxis. “Most are pleasantly surprised at how well it performs in comparison to petrol-or diesel-fuelled cars, and how quiet it is,” he said.

Liam Brady, Managing Director of NRC Taxis said: "NRC Taxis are honoured to be associated with the ESB and the e-Taxi over the past two years. It has been enlightening for us, as a company, to engage with such an initiative; which not only is good for the environment but also beneficial as a cost saving measure in running a taxi. We would expect more drivers to take up the electric option in the coming years and NRC look forward to being a part of that e-Taxi future." "