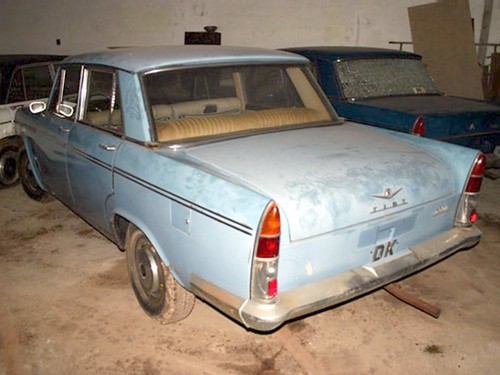 And here’s the story:

"Jens Sørensen owned a Fiat garage in Kolding, Denmark, and for some reason didn’t resell the cars which he took in part-exchange for new ones between 1973 and 1981.

Then in 1981 he was made to choose by Fiat Denmark whether to run the business as a truck agency or a passenger car franchise. He opted for the trucks, and just left all the passenger cars where they were, including some unsold new models.

Now a descendent of his who appears to be Kjeld, son of Sven Sørensen, finds that he owns about 200 old cars, and has decided to sell most of them. So far this has only been publicised by word-of-mouth. He plans to keep the best examples of each model, but others are for sale, ranging in value from the equivalent of €250 for an accident-damaged Fiat 600 to €6500 for a Lancia Beta with 16,000 km on the clock, which was run as a company car.

There are some second series Fiat 127s with delivery mileage, but it seems that there are problems with cars which were never actually registered when new. These cannot now be put on the road in Denmark because of emissions regulations."