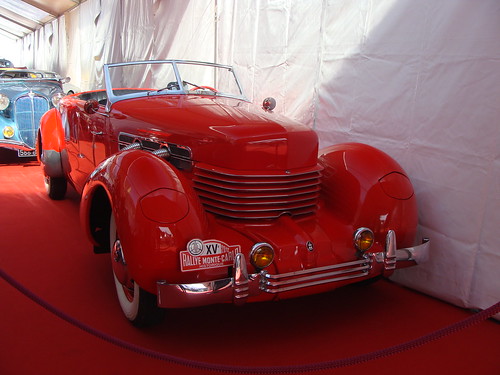 Front engine, front wheel drive, 2886 cc Lycoming 190 Hp V8, Schwitzer-Cummins centrifugal super-charger, four-speed manual transmission with Bendix electric pre-selector, four-wheel hydraulic drum brakes, independent trailing arm front suspension, transverse spring.
By 1936, the centerpiece of E.L. Cord’s Cord Corporation, the Auburn Automobile Company, was in dire straits. Sales had plummeted in 1932 from the record 1931 levels, and had been in a slow-death spiral ever since. This was in spite of the fact that Auburn produced some beautiful and mechanically exciting automobiles such as the Supercharged 1935 851 Speedster.
Clearly, something had to be done, and fast. As always, E.L. was sure he had the answer this time in a totally new car. Cord dictated that the new sensational Gordon Buehrig design would now wear the Cord name and be front-wheel drive.
Unlike its predecessor, the 810 series took a more modern and successful approach to FWD. A sensational new 125 Hp (190 Hp in supercharged form) V8 was developed by Cord’s Lycoming subsidiary. The new four-speed pre-selector gearbox was located forward of the front axle.
The supercharged Phaetons with their exposed exhaust pipes and rakish stance with fully disappearing tops are the most beautiful of the breed. In his book "The American Automobile", legendary automotive writer Ralph Stein tells of encountering a supercharged Cord in the late 1930s somewhere in Indiana on the way to the Indianapolis 500. "The Cord owner came around us like we were standing still and pulled away at a steady 100 mph plus. That supercharged Cord really went !".
Driving any Cord is an experience to be savored, but driving a supercharged car is a special treat. The passenger compartment is snug, and the steering wheel comes beautifully to hand. The engine-turned dash board and instruments is a master work of art-deco beauty. Even the radio is a spectacular ellipse, rather than the regular boring dial. The 6 volt starter turns over with an almost inaudible whine. The Lycoming V8 spins easily to life with an almost imperceptible idle which belies the 190 Hp on tap. The supercharger is almost inaudible at slow revs, but makes an ear pleasing whine when pushed.
This is one of the 99 supercharged convertible phaetons which were built.