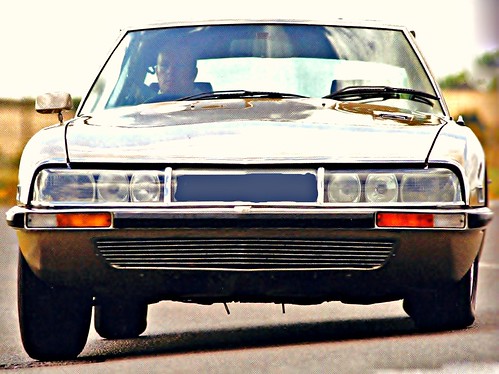 The Citroën SM was a high performance coupé produced by the French manufacturer Citroën between 1970 and 1975. The SM placed third in the 1971 European Car of the Year contest, trailing its stablemate Citroën GS.

Citroën purchased Maserati in 1968 with the intention of harnessing Maserati’s high performance engine technology to produce a true Gran Turismo car, combining the sophisticated Citroën suspension with a Maserati V6 engine. The SM was Citroën’s flagship vehicle, competing with other high performance GTs of the time from manufacturers such as Jaguar, Lotus, Ferrari, Aston Martin, Alfa Romeo and Porsche.

The SM combines many unusual and innovative features, some of which are only just becoming commonplace on cars of today such as rain sensitive wipers. It also borrows heavily from the innovations introduced on the DS, by including hydro-pneumatic (oleopneumatic) self-leveling suspension, and self-leveling lights that swivelled with the steering.

The SM provided a combination of comfort, sharp handling, and high performance not available in any other car at the time. Citroën itroduced a new type of variable assist power steering that has since spread throughout the vehicle population. DIRAVI as it was called, allowed great assistance to the motorist while parking, but little assistance at motorway speeds. The steering actually had the same assist at all speeds – the steering was hydraulically locked against steering movement of the wheels from the road (feedback) up to the capacity of the unit. Hitting a pothole at high speed would not turn the steering wheel in the driver’s hands. Once the driver is accustomed to the system, traditional steering feels old-fashioned while the steering column itself is adjustable in both height and reach.

The braking system, adapted from the DS, employs disk brakes at all four corners (the DS has drums at the rear), with the front brakes being inboard, and cooled via large ducts on the front underside of the car. The hydraulic braking pressure front to rear balance is self-adjusting according to the weight in the rear of the car. To this day this stopping distance remains outstanding.

Standard wheels are steel with stainless trims, but a factory option was available for lightweight wheels made of composites. These wheels weigh less than half the standard weight and are possibly a unique application of composites on a production vehicle.

The look of the car, although easily identifiable as Citroën, is quite distinct, with a shape that even today looks futuristic. The car was even used in a 1999 television advertisement for British Petroleum of Spain, where ‘a futuristic car was required’. Designed in-house by Citroën’s chief designer Robert Opron, the SM bears a vague family resemblance to the DS, especially in retaining the latter’s rear wheel spats. [The DS’ entire rear wings came off.]. Seen from above though, the SM resembles a teardrop, with a wide front track tapering to a narrower rear track.

Opron worked on aircraft body design and aerodynamics while in the USA, and the SM benefited from this experience. Aerodynamic efficiency influenced the final design of many details including the shape of the side mirror, the method of windshield sealing, and the underbelly of the car which featured active aerodynamics, effectively sucking the car to the road at high speed. Even the ventilation intake is located in a neutral area on the bonnet, which makes the ventilator fan regulate the interior ventilation at all road speeds. The result was an unusually aerodynamic car for its era, with a very low drag coefficient of 0.26.

In 1970, it was a car of the future and the fastest front-wheel drive car to be made, with a top speed of 137 mph. Many other cars will go faster for a dash, but most will not withstand long periods at such speed. It was an example of the car as a symbol of optimism and progressive technology, similar to the SM’s contemporary, the Concorde aircraft. The true distinction in speed of the SM is its ability to to travel for hours with impressive fuel economy on the large 90 litre fuel tank.

With its distinctly Art Deco influence, the interior styling of the SM is as dramatic as the exterior. The small oval steering wheel is matched by oval gauges. The manual shift lever gaiter is a highly stylized chrome gate. The seats are highly adjustable buckets with centre padding composed of many individual rolls. High quality materials are used throughout. The bonnet is aircraft grade aluminum, while the external bright work is stainless steel, rather than cheaper chrome (except for plastichrome SM trim at the rear base of the gutter).

The SM was sold with a small, lightweight engine in various forms, designed from scratch by Giulio Alfieri but capable of being assembled on existing V8 tooling. Because of this, the engine sported an unusual 90 degree angle between cylinder banks – a trait shared with the later PRV V6. It was a very compact and innovative design that allowed the use of just one pattern for the cylinder heads and an intermediate shaft extended out to drive the auxiliaries.

The size of the 2.7 L engine was limited by French puissance fiscale taxation, which effectively banned large displacement vehicles. The engine was also used in the Maserati Merak from 1973 to 1982 (later versions for the Merak SS had much larger valves and a reputed 220BHP) and the Ligier JS2 sports car. The final SMs were produced in the Ligier factory in Vichy.
5 speed manual and 3 speed Borg Warner fully automatic transmissions were fitted early on, but with the rest of the world outside North America only getting the fully automatic in 1974 & 1975.

Much of the SM’s technology was carried forward to the Citroën CX, launched in 1974 – the DIRAVI steering being the most obvious example. The same basic engine in enlarged 3.0 L form (some in Italy had 2.0 L) was used in Maserati’s own Merak which, together with Maserati’s Khamsin and Bora, used Citroën’s high pressure hydraulics for some functions, and the Citroën gearbox in the Merak, during the Citroën-Maserati alliance.

The factory always produced just one body style – a LHD two door fastback fixed head coupe, but the design did inspire a variety of variants, none produced in any quantity.

Coachbuilder Henri Chapron from Levallois-Perret produced 7 convertibles (SM Mylord) and 8 saloons (SM Opéra). Original copies of these rare models are very valuable – some SM owners have made their own copies of the SM convertible in particular.

In 1971, Heuliez also produced 2 examples of a targa top convertible, the SM Espace.

UK sales were always disproportionately low, amounting to just 325 cars, because the SM was never produced at the factory in right-hand drive. Three official prototypes were constructed by Middleton Motors, a Citroën dealer in Hertfordshire, England. At least one of these prototypes still survives. Cars are still being modified with RHD controls and dashboards for the Australian market, where RHD is mandatory.

Frua also proposed a concept car based on the SM, a front wheel drive car that closely resembled the mid-engine Maserati Merak.

The Maserati Quattroporte II was a Maserati-badged, 4-door variant of the SM, with an angular body and lengthened floorpan. The six headlights were retained and the later SS version of the engine fitted. This model was introduced in 1974 and only thirteen were produced between then and 1978.