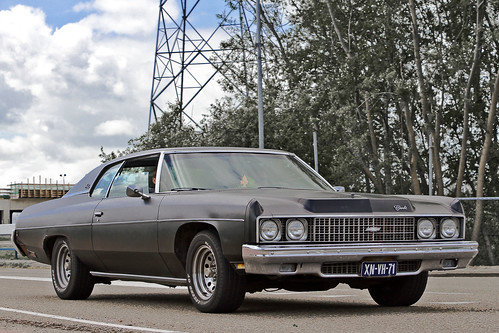 Special:
– Chevrolet was co-founded by Louis Chevrolet and William C. Durant. Louis Chevrolet was a race-car driver, born on December 25, 1878, in La Chaux de Fonds, Switzerland. William Durant, founder of General Motors, had been forced out of GM in 1910 and wanted to use Louis Chevrolet’s designs to rebuild his own reputation as a force in the automobile industry. As head of Buick Motor Company, prior to founding GM, Durant had hired Chevrolet to drive Buicks in promotional races.
– By 1916 Chevrolet was profitable enough to allow Durant to buy a majority of shares in GM. After the deal was completed in 1917, Durant was president of General Motors and Chevrolet was merged into GM, becoming a separate division.
– The Impala was designed by Chevrolet Chief Engineer Ed Cole and named after an African antelope.
– In ’72, Impala all-time sales topped the 10 million mark, extending its lead as the best-selling full-size car in automotive history, more than double the sales of the next nearest competitor at the time, the Ford Galaxie.
– The 1972/1973 model was the longest Impala yet and still the best-selling full-size car in North America to date.
– Beginning in 1972, all engines were designed to run on unleaded gasoline.
– It was also the last year of the mpala Convertible.
– The 1973 Impala Custom Series 1BL was an independent model Series.
– This fifth generation Impala (1971-1976) was assembled in Arlington (Texas), in St. Louis (Missouri), in South Gate (California) and in Rosario, Santa Fe (Argentina) while the right-hand drive (RHD) Impalas were produced in kit form in Oshawa – Canada for Australia, New Zealand and South Africa and assembled locally from CKD or SKD kits.