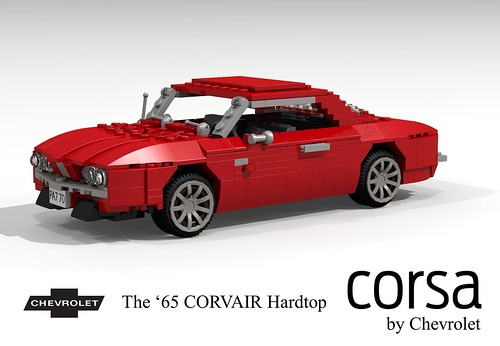 Once in a while things change from the everyday and someone tries something new.

If you are on top, and things are going great, this tends not to happen. So it was with some surprise that the great General Motors, leading vehicle manufacturer of the world, with more than 30% total global market share, tried something ‘new’.

Having successfully built its huge empire, primarily in the US, by producing ever larger Body-on-Frame (BOF) full sized cars, exhibiting more chrome, more fin and more engine than the facing competition, it was a small (by US Standards), rear-engined, bath-tub shaped car named Corvair (after a Corvette-based concept from 1955), that showed that the big dog could learn a new trick.

The ‘new’ was not without precedent. In the back rooms, GM engineers were trying all sorts of interesting things, but Styling and Marketing were more than happy to fill up customer orders faster than the factory could build them. However, as the facing ‘Independent’ US manufacturers were in terminal decline during these early post war period, a new competitor was slowly gaining ground, not by copying GM’s flash and fins, but with a little, ugly, slow car from Germany. The badge said VW, but the car was known as the ‘Beetle’.

The Beetle template was straight forward: engine in the back, behind the rear axle. The engine was made of aluminium to help with the weight distribution, and featured horizontally opposed pistons to keep the engine height down. The ‘chassis’ was a simple platform, with the engine hung out the back by four bolts and a throttle cable. The bodywork, designed prior to the war under Adolph Hitler’s close watch, wore an aerodynamic profile, grilleless nose and room for four passengers. The original brief for the car was to be capable of 100 km/h on the new Autobahns, all day long, reliably and economically. Not only was the car designed to a tight, modest brief, it was also intended to put the German populace on wheels, much the way the Ford Model T had in the US 30 years earlier.

Such a modest car was not within the ‘competitive set’ for any of GM’s US product lines, but it was an irritating itch during a prosperous 1950s post-war America, and GM’s crystal-ball readers had forecast that the economy could not continue you grow in an interrupted manner, and there would be a market for a cheaper, more modest car that wore a well-known US manufacturers badge. Ford had similarly crystal-balled this scenario, and produced the cost-focused Falcon, and similarly Chrysler with the Valiant.

Of these products though, GM was the most ambitious, and reset the US-made template.

How could it all go so wrong?

The same drivers that led to the very modest Ford Flacon found their way into the specification of the Corvair’s rear suspension. Missing the stabiliser bars of high-spec performance models, the base Corvair developed a reputation for falling off the road. The cause: rear wheel camber change under braking and cornering resulting in a loss of grip and a tendency to swap ends. This fault had led to many fatal crashes, including some high-profile cases. The cause was taken up by a young consumer rights advocate, Ralph Nader, and the Corvair was the feature act in his book ‘Unsafe at any speed’. By this stage, the Corvair had evolved into the second generation model, illustrated here, with updated suspension. The die was already cast however, the Corvair name ever to be tarnished. A ‘burned’ GM withdrew from adventurous engineering and followed Ford’s more conventional path with the Chevy II / Nova / Camaro models which had the traditional front-enginened rear-wheel-drive layout within a compact unibody design.

Unfortunately this legacy has overshadowed the advancements present in the Corvair: Independent suspension, the turbocharger, aluminium engine and monocoque construction. Not only that, but the second generation cars looked stunning – clean, chromeless, light – the very antithesis of what Detroit was becoming.

By the end of production of the Corvair in 1969, Detroit had moved on. The second invasion was beginning with the entry of Japanese cars into the US markets, and Detroit’s long decent had begun.

The beautiful little gem of the Corvair remains within classic car collector clubs to remind us of a time with the GM juggernaut would be proactive, do something new and provide the motoring world with something special.