Place: Guangzhou, Guangdong Province Chinese name: 比亚迪秦 (bǐyǎdí sùruì qín) Year of launch: 2013 BYD Auto is a subsidiary of BYD Company, a major manufacturer of rechargeable batteries. BYD started producing cars in 2005 when it acquired Qinchuan, a company that produced the Flyer small car. In 2005 it was […] 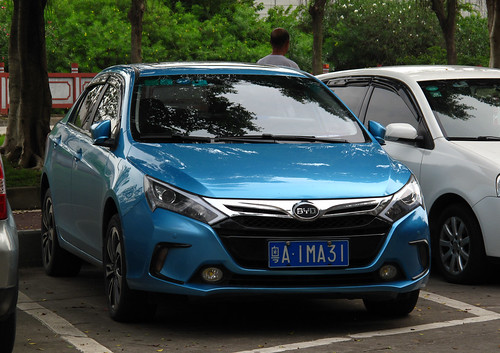 BYD Auto is a subsidiary of BYD Company, a major manufacturer of rechargeable batteries. BYD started producing cars in 2005 when it acquired Qinchuan, a company that produced the Flyer small car. In 2005 it was followed by the hugely popular F3, a copy of the Toyota Corolla E120. It was the best selling car in China in 2009. BYD is infamous for copying cars of Japanese car manufacturers: through the years it has made copies of the Toyota Aygo, Corolla E120, E140, Estima, Honda Accord, Honda Odyssey and Renault Mégane Coupé-Cabriolet, while other cars have striking similarities with the Buick Excelle HRV, Mercedes-Benz SL and Lexus RX. Two years after the arrival of the F3 sedan the hatchback version, named F3R, was launched, which means it is a mechanical copy of the Toyota Corolla as well, albeit now with a rear end inspired by the Buick HRV (Daewoo/Chevrolet Lacetti).

The BYD Surui, a copy of the Toyota Corolla E140, was launched in 2012. The BYD Qin plug-in hybrid and electric vehicle (EV300), as well as the electric BYD e5 are based on the Surui.