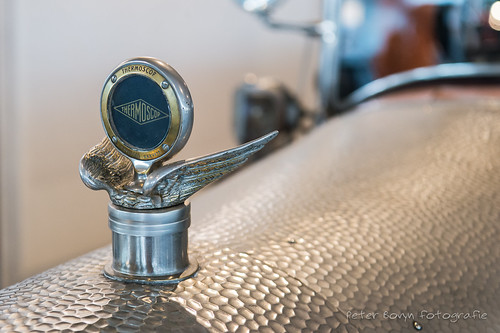 The world automobile industry grew a lot between the end of 19th century and the First World War. Each important firm depended on the races to introduce their name and products; each one had in production sports cars and touring or formal cars.

The Benz firm was one of these companies and, beside the 15-liter and 21-liter racing cars and the impressive 8-liter formal cars, produced, just before the First World War, the 8 /20PS, a reliable touring car.

The car shown in the museum has an interesting story because it was ordered by an Indian Maharaja with this unusual and unique bodywork which joins the hand-worked nickel-brass bonnet, radiator and headlights to the Vienna straw details which decorate the mahogany side panels of the body, part of the interior and the large external luggage rack.

There was space for 6 people inside, thanks to the two folding emergency seats in the rear compartment.

The dashboard is full of instruments and the odometer has a mile scale; on the outside there is an air (horn) shaped like a boa snake, which was applied in later years.

At the beginning of the 60’s the car was fully restored with the technical assistance of the Daimler-Benz Museum; after being exhibited for over 20 years in two different American museums it was purchased by the Nicolis Museum in 2003 and has only 6.000 km on the clock from new.