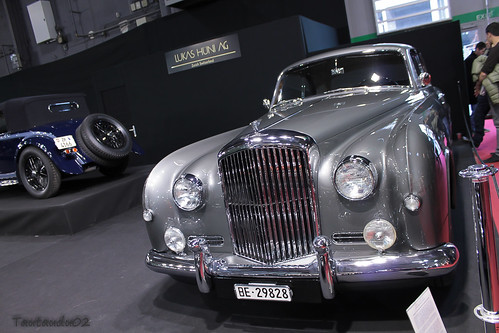 Bentley ranks amongst the famous makes in history. Founded by W.O.Bentley in 1919, his cars were most successful in racing, having won the 24 Hours of Le Mans no less than 5 times. The Great Depression and the fading support by its financier Woolf Barnato led to the end of the W.O. period in 1931, when the company was taken over by its rival Rolls-Royce and production moved to Derby. After World War II, the Rolls-Royce plant was moved from Derby to Crewe. Although in the process of industrialisation, Rolls-Royce and Bentley cars were made in the new "Standard Steel" version (car totally built in house including coachwork), the more luxurious "Coachbuilt" version was still available to special offer. For the "Coachbuilt" version, the manufacturer built the "rolling chassis" but then commissioned the coachwork to an authorised coachbuilder, allowing the customer to choose from a variety of different coachwork designs.
From 1950 until 1959, all Bentley cars featured the 6-cylinder engine legendary from the Thirties, gradually upgraded to 4.5 litre, and 4.9 litre after 1959. No other engine offers the silence, smoothness and total absence of any vibration like the Bentley 6-cylinder engine. The subsequent Bentley V8 engine after 1959 was clearly stronger, but not nearly as refined.
Only Bentley (not Rolls-Royce) cars were optionally available with the "Continental" option, an upgrade featuring a more sporty suspension, a higher rear axle ratio and a rev counter instrument, suitable for long distance high-speed cruising. This "Continental" option made these large and elegant Bentley cars surprisingly sporty and nimble to drive. On the coachwork side, one particular model is a milestone in the history of Postwar Bentley cars – the S1 Continental Park Ward Coupé. For reasons never quite understood, the S1 Continental Park Ward handles infinitely better than its contemporaries by H.J.Mulliner, James Young, etc, which must have to do with the way that the bodies are attached to the chassis. Another quality makes the S1 Continental Park Ward unique – its outstanding coachwork design which is elegant yet very sporty.
This particular car, the S1 Continental Park Ward Fixed-Head Coupé chassis N°BC38LCH is very special for a number of reasons. Firstly, it is one of only 33 cars built with left hand drive (of which only some 10 examples were made with the small rear quarter window). Secondly, it was totally restored by foremost expert P. & A. Wood from 2005 until 2009, including a number of special upgrades such as secondary fuel pump system, auxiliary fan system and fully integrated air conditioning. No other Fifties grand touring coupé car offer performances and comfort quite like this car.