This is a Bricklin SV-1 (Safety Vehicle One) parked in the parking lot of a professional centre on Merivale Road in Nepean. The Bricklin SV-1 was a Canadian-made sports car, built in 1974 and 1975 at a factory in Saint John, New Brunswick, with many similarities to the DeLorean DMC-12, […] 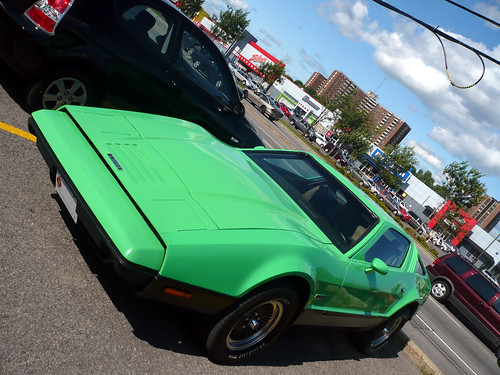 This is a Bricklin SV-1 (Safety Vehicle One) parked in the parking lot of a professional centre on Merivale Road in Nepean.

The Bricklin SV-1 was a gull-wing door sports car assembled in Saint John, New Brunswick, Canada. The body panels were manufactured in a separate plant in Minto, New Brunswick. Manufactured from 1974 until early 1976 for the U.S. market, the car was the creation of Malcolm Bricklin, a Jewish American millionaire who had previously founded Subaru of America. Due to Bricklin’s lack of experience in the auto industry, coupled with the fact that the cars were not properly designed or engineered, the Bricklin factory was not able to produce vehicles fast enough to make a profit. As a result, only 2,854 cars were built before the company went into receivership, owing the New Brunswick government $23 million.

In an attempt to reduce production costs, Bricklin attempted to bond fiberglass to acrylic plastic–something the plastics industry had not perfected at the time–resulting in a high failure rate and high production costs (more often than not, the panels cracked while still in their molds). The result was a sports car of indifferent quality and disappointing performance that some dealers refused to sell. It soon became obvious that Bricklins claims of a "high performance safety car" were nonsense. Also contributing to the company’s decline was Bricklin’s tendency to assign inexperienced family members to executive positions on his Board. It is believed that fewer than 1,000 Bricklin cars still exist.

The model name (SV-1), stood for "safety vehicle one". The original idea for the Bricklin SV-1 was a safe and economical sports car; however, due to the safety consideration of making the car heavier, it became more expensive. The Bricklin was designed for safety with an integrated roll cage, 5 mph bumpers, and side beams. The body was fibreglass with bonded acrylic in five "safety" colours: white, red, green, orange and suntan. The cars had no cigarette lighter or ashtray. Non-smoker Malcolm Bricklin believed it was unsafe to smoke and drive. The Bricklin is the only production vehicle in automotive history with factory powered gull-wing doors that opened and closed at the touch of a button (when they worked), unlike the later DeLorean DMC-12, which featured manual operation of its gull-wing doors. The power operation of the Bricklin’s doors, however, was plagued with electrical problems. They also leaked, which caused problems for dealers who got little factory support in correcting these problems.

Power came from a 360 cu in (5,899 cc) AMC 360 V8 for 1974. Later cars used a 351 cu in (5,752 cc) Ford Windsor V8. A high-performance V8 was chosen so that in case of an impending accident, the power of the V8 was enough for the owner to pull away from the potential accident. The weight of the car, however, made this implausable. The front suspension used A-arms and coil springs, while the rear used leaf springs on a live axle. 772 model year 1974 cars were produced, 137 of which had four-speed manual transmissions. All 1975 and 1976 cars had automatic transmissions.

After the Brickin manufacturer’s receivership, George Byers and Sol Shank of Consolidated Motors, an automotive liquidator from Columbus, Ohio, purchased the majority of the parts and remaining cars left on the line. These cars surfaced later, completely assembled from left-over parts, and were sold as 1976 models.

Under the direction of New Brunswick Premier Richard Hatfield, the provincial government provided financing of $4.5 million for Bricklin’s car. The money had been advanced on the assumption that Bricklin needed it to begin the production of cars. In truth, it had paid for the engineering and development of Bricklin’s car as well as many of the costs, including salaries of keeping Bricklin’s U.S. companies in operation.

During production, the Bricklin manufacturer was constantly in debt, and had relied on provincial government support to keep the company running. One reason is the vehicle was estimated to cost $16,000 to build, but sold for $5000 each to the Dealers, so the company lost the equivalent of sales of more than two Bricklins for every car built. To further complicate problems, Richard Hatfield was discovered to have secretly funded the failing company to win reelection. After the funding scandal, the government turned down a request for an additional $10 million to keep the company running. The factory shut down, and was put into receivership on September 25, 1975.

Here is a demonstration of the various features of the Bricklin SV-1.