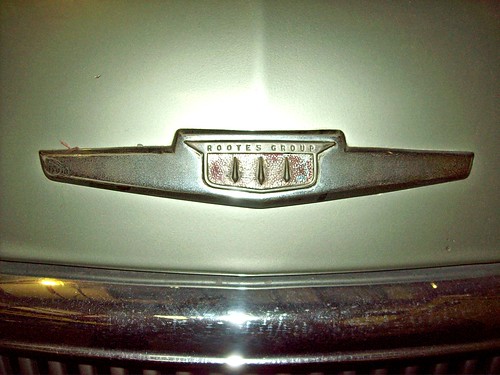 Originally founded in Hawkhurst, Kent in 1913 by William Rootes as a car sales company, the firm had moved to Maidstone by the First World War and, during the war, was involved in the repair of aero engines. By 1924 Rootes was the largest truck and car distributor in the United Kingdom.
The group rapidly expanded with the aquisitions of Thrupp and Maberly (1926), Hillman, Humber and Commer (1929) Karrier (1934) Clement, Talbot and Sunbeam (1935), British Light Steel Pressings (1937); and Singer (1956)
Rootes was best known for manufacturing solid, dependable, well-engineered middle-market vehicles.
During the Second World War Rootes like most other British car manufacturers, became involved with the production of armaments. In 1940 under the Government’s shadow factory scheme, Rootes built its massive assembly plant in Ryton-on-Dunsmore, near Coventry, initially manufacturing Bristol Blenheim and later the Handley Page Halifax in shadow factories at Speke Airport, Liverpool and Blythe Bridge Staffordshire.where Rootes also manufactured military vehicles, based on the Humber and Commer. Including Field Marshall Montgomery’s famous Humber the victory car.
Rootes had a rare lapse of business judgement shortly after WWII. When he visited the Volkswagen factory in Wolfsburg to evaluate it for war reparations, he opined that it – and the Beetle – had no value.
Following the war, Rootes also sponsored satellite manufacturing operations around the world, notably in Australasia (Rootes Australia) and the Middle East. The best known example of the latter was the Iranian-built Paykan, based on the Hillman Hunter. In 1950 it acquired Tilling-Stevens, a truck and bus manufacturer based in Maidstone, Kent
Rootes successfully sold a range of cars priced at a slight premium to their major home market competitors, justified on the basis that they offered a level of superiority in design and finish. and employed Studebaker stylist Raymond Loewy as a design consultant to Rootes; evidence of his influence is most readily seen in the 1956 Audax range of cars, which included the contemporary Hillman
Minx, a model also produced under licence by Isuzu Motors of Japan as the Isuzu Hillman Minx.
During the 1950s, Rootes’s promotion included a strategy of participation in major UK and European car rallies. Stirling Moss and Sheila van Damm were their top drivers, and the Sunbeam-Talbot 90’s win in the 1955 Monte Carlo Rally was the most significant victory.and in 1968 Rootes entered a factory team in the London-Sydney Marathon, driving a Hillman Hunter. Andrew Cowan gained what was regarded as a surprise victory against stiff competition from factory teams with bigger budgets.
In 1963, Rootes introduced the Hillman Imp, a compact rear engined saloon with an innovative all-aluminium OHC engine, based on a Coventry Climax engine design as a response to the BMC Mini. The company was persuaded by PM Harold Wilson’s Government to base production at a new factory at linwood, Renfrewshire, under the principle of "industrial development certificates" (IDCs) to build factories in depressed areas.
Production and build quality was affected by an inexperienced workforce, industrial disputes and a supply chain with component suppliers still based in the Midlands,incurring major transportation costs.
Following the death in 1964 of Lord Rootes, his son, William Geoffrey Rootes, became the second Lord Rootes, and also became the new chairman of Rootes Motors. On 1 May 1967 Lord Rootes appointed Gilbert Hunt, a Wolverhampton-born business executive, who at the time was managing director of Massey-Ferguson in the UK, to be the new managing director of the Rootes Group. Hunt’s appointment was made with the support of the Chrysler Corporation, which was building its holding and control over the business during this period.
By the mid-1960s, Rootes was progressively taken over by the Chrysler Corporation of the United States, following huge losses amid the commercial failure of the troubled Imp. The company’s financial year ran to 31 July, and in the year ended 31 July 1967 Rootes was able to report a pre-tax profit of just £3.8 million. It was the first reported profit since 1964 and compared with a pretax loss of £10.7 million in the year ending in 1966. Lack of funds for new model investment was a striking feature of the company’s final decade.
Chrysler was also only too keen to take control of the struggling firm as it wished to have its own wholly independent European subsidiaries like arch rivals Ford and GM. Chrysler took over Simca of France and Barreiros of Spain at the same time, merging it with Rootes (now renamed "Chrysler UK") to create Chrysler Europe.