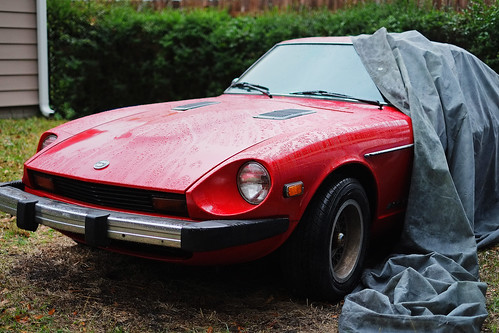 For my second photo of this year’s Project 365, I post an image of my 1978 Datsun 280Z. I’ve had this car and enjoyed it since college. One of my first cars, a Ford Probe, had received damage to the engine head (which a friend of mine and I later rebuilt). I bought the Z on September 1 which happened to be the day that I later heard that I had lost my grandmother. Because of the combination of sad and happy news, I will always remember the date. Walking up to the Z after having looked at many cars that fit the bill of "affordable" and "fun sports car," I knew that this would be the one. Apparently, I trusted that since it died on the test-drive and stranded me temporarily at a gas station with the would-be seller. A good way to help with price negotiation. 😉

Like any car, it has seen its ups-and-downs, but for the most part has been quite dependable. It’s also survived racing by a previous owner at Road Atlanta and auto-crossing by me at Clemson. As a strange side note, I met the original owner by sheer coincidence in Greenville, SC one time. He told me of its original gold color with white interior (which I knew from working on the car) and also of a fun story where he spilled hot-dogs and sprite on his would-be wife during an early date in the car.

A little over a year-ago, I began an ambitious restoration project. While I didn’t have the space or tools for a frame-up job, I did about as close as I could get in the marina parking lot, the community-college bodyshop, and my eventual backyard. The body and paint are looking good again, now it’s time for more.

The plan for 2013, and part of why I posted it for Project 365, is to finish the restoration by completing some maintenance work and the interior — insulation, carpet, vinyl, and some new stereo components. Looking forward to it being back in full action.