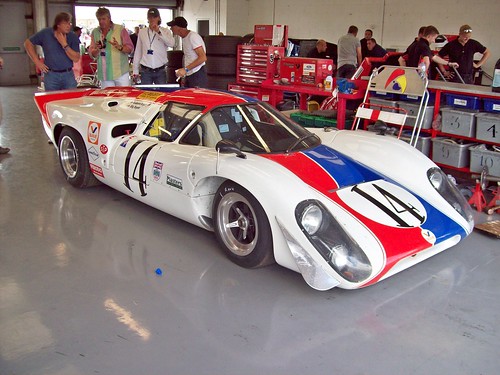 The Lola T70 was developed by Lola Cars in 1965 in Great Britain for sports car racing. Lola built the chassis, which were typically powered by large American V8s. Over 100 T70s were built in three different guises, an open-roofed Mk II spyder, followed by an Mk III coupé, and finally a slightly updated Mk IIIB. The T70 was replaced in the Can-Am by the lighter Lola T160.
Early success for the Lola T70 came when Walt Hansgen won the Monterey Grand Prix, at Laguna Seca Raceway, on October 17, 1965, driving John Mecom’s Lola T70-Ford. In 1966 Chevrolet powered Lola T70s won five of the six races in the CanAm Series, with a Ford powered T70 taking the sixth race but by 1967 the McLaren M6 was the car to beat. When the FIA changed the rules for sports car … Read More