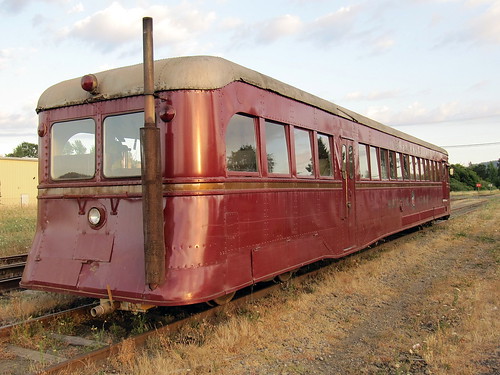 July 2010 view of California Western streamlined motorcar M-300 at Willits CA. This well-traveled motorcar.was part of a three car order built by ACFin 1935 for Seaboard Air Line (SAL 2024-2026). Seaboard sold the cars in 1944, with two going to the original Norfolk Southern (and later exported to Cuba) and this one, SAL 2026, going to Aberdeen & Rockfish as their 106. It then became Salt Lake Garfield & Western MC-3 in 1951, and finally arrived on the California Western ("The Skunk") in 1963, becoming the M-300.

The Volkswagen Phaeton is the most impressive piece of engineering to ever roll out of VW’s headquarters in Wolfsburg. When it came out over a decade ago, it redefined its segment. Today, you can get this one for only $14,000. Let’s go for a ride and spotlight the 2005 Volkswagen Phaeton.