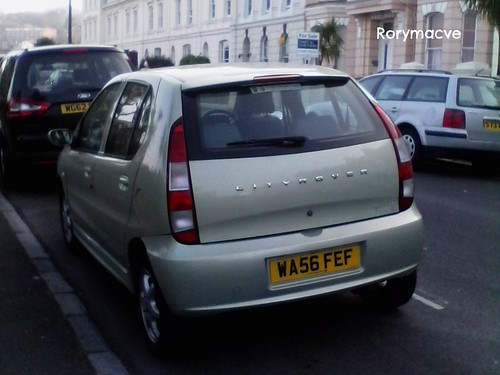 Forgive me for having been on a bit of a Rover binge lately, but for those who don’t know on 15th April 2005, the Rover Group finally ran out of money and Britain’s last volume car manufacturer disappeared forever. I remember well the BBC news reports showing workers being turned back at the gates of the Longbridge Plant in south Birmingham, their jobs finished and their cars ceased. In all, nearly 6,000 people in the Midlands were sacked upon the closure of Longbridge, and whilst Rover, a brand that had dated back to 1904 and had once been a symbol of pedigree British Motoring, finally died after a long and painful spell under British Leyland and ownership by BMW, MG was able to claw away from darkness thanks to Chinese investors, rescuing one of the most renowned and hallowed names in Motorsport history.

However, when it comes to what finally killed the Rover Company, what put the bullet into the back of their confused head, this is usually what people will choose. You’ve heard them all say this before, Auto Magazines, Fifth Gear, Top Gear, any other gear, they’ve all said the same thing, the CityRover was the evil that murdered Rover and the British Motor Industry.

But should we malign the little CityRover? Was it really the sole culprit?

I personally don’t think so, sure it didn’t help, but at the same time in order to understand Rover’s situation you have to go back to the early 90’s. In 1994 BMW bought Rover Group from British Aerospace and started to reorganise the poorly performing company and its damaged reputation under British Leyland. Throughout the decade the company either refurbished models from the 80’s such as the Range Rover, the Rover 200, 400 and 600, or replaced many former British Leyland Models such as the Montego, the Maestro and the Metro, whilst also developing new ones such as the Rover 75. Things were on a high note for the company, the cars were great, the quality was great, they were reliable, well performing, smooth, crisp, the motoring press more often than not lauded them for their precision and craftsmanship, with a style that harked back to the grand old days of British Motoring.

Sadly Grand Old Britain was seen less as a nostalgic roadtrip by potential British buyers, and more a crude attempt by BMW at stereotyping the British as Victorian relics of a dated and long dead social layout. Although older drivers and retired couples would buy them up in droves, the younger demographic wouldn’t touch them with a bargepole and Rover was losing a fortune. Things didn’t look good, the Metro wasn’t selling due to safety issues, the Mini was no longer a mass-production car and more a customer request novelty item, and while Land Rover and Range Rover were doing well in their own right, the Rover Company was haemorrhaging money and BMW lost all interest.

In 2000, BMW chose to break up Rover Group into its most profitable parts. Land Rover/Range Rover was sold to Ford, whilst the Mini and Metro were discontinued, but with the Mini Marque being retained by BMW to start a new production life as the New Mini of 2000. The rest of the Rover Group, including MG, was sold at the derisory sum of £10 to British based holding firm Phoenix Venture Holdings, a clear sign of the sheer lack of confidence in the ailing company.

Cash strapped, Rover had no way of developing new models, and instead had to refurbish, refresh and reorganise their existing product range. Cars were given facelifts, whilst different variants of current cars were developed such as the Rover Streetwise. In a last desperate attempt to rescue the company and to gain a foothold on the lucrative Supermini car market they had lost with the axing of the Metro, Rover had no choice but to turn to foreign climbs. Their destination was India, where the rising star of the Indian car industry, TATA, was bringing out the small city-car known as the TATA Indica. The car itself is very basic, but quite well performing. Contemporary road tests showed that the Indica was well handling, practical, smooth, fun to drive and generally an all round good egg. Rover’s intention was to buy the rights to re-brand these cars with Rover badge and grille, either when they arrived in the UK after construction in India, or building their own versions at Longbridge.

Launched in 2003, the Rover CityRover met some ‘interesting’ reviews. Many complimented it similarly to that of the TATA Indica, for its safety, spacious interior and good performance, but at the same time many criticised the fact that the addition of the Rover badges meant that the car was also very expensive for the market it was trying to appease, costing £6,495, £3,000 more than the regular Indica. But most notoriously, the car’s criticism came from the fact that Rover had literally hit the bottom of the barrel. Gone were the days of the mighty P5 and SD1, their legacy smitten by a plastic box.

Because of this criticism, Rover were reluctant to hand over the car for reviews by motoring shows and magazines. Probably the most famous of these reviews was one carried out by James May for Top Gear, where using a hidden camera he was able to do an undercover review of a CityRover after taking it for a test drive from a local showroom. He would later call it the worst car he’d ever driven on the show. The CityRover also found a spot on Top Gear’s ‘Worst 13 Cars of the past 20 years’, and has frequently been cited as the biggest automotive failure in history. Rover did respond by reducing the price of the car by £900 in 2005 but by then it was too late, Rover had run out of cash and production came to a grinding halt.

So, was the CityRover the deadly final blow? Personally, I say it was a victim of circumstance. The Rover Company was desperate for a hit, and even without the CityRover the company would still have been losing money heavily and probably gone bankrupt all the same. Some may argue that the CityRover only hastened the inevitable, but I think it may have forestalled it as the CityRover did sell in reasonable numbers. In the UK you’ll find a fair few floating about (if they haven’t been driven over by a Monster Truck on Top Gear Live). If the CityRover had been a complete and utter abject failure then selling would have been in the few hundred rather than a few thousand. Either way this car was sadly a failure, one of the biggest in motoring history, but I find it does show that Rover fought to the very end to stay alive and keep the British Motor Industry going as long as possible before its timely demise.

British Leyland was the one that killed our auto industry, the CityRover was simply a small cog in a much larger mechanism of industrial suicide!