You don’t have to go too far back into history to find this controversial machine, spawned from a great idea, but resulted in the destruction of the car industry in Northern Ireland and the near imprisonment of the company’s founder John DeLorean. John DeLorean (1925 – 2005) was a very […] 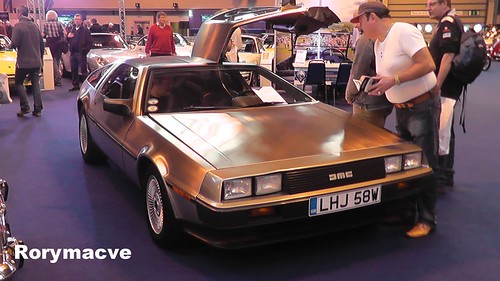 You don’t have to go too far back into history to find this controversial machine, spawned from a great idea, but resulted in the destruction of the car industry in Northern Ireland and the near imprisonment of the company’s founder John DeLorean.

John DeLorean (1925 – 2005) was a very talented car designer at the General Motors Corporation, designing many classics such as the Pontiac GTO and the Chevy Vega.Unsatisfied with his maverick way of business he was eventually let go from GMC in 1973, despite being the Vice-President.

But this was not the end of his story as he chose instead to create an ethical utopian sports car that wasn’t built with the planned obsolescence that the big Detroit businesses were building their cars. With that, he formed the DeLorean Motor Company, affectionately dubbed DMC.

Originally his plan was to open a factory in Puerto Rico, but eventually settled in Northern Ireland after £100 million was offered by the Northern Ireland Development Agency, who also made a deal that it would be funded by the British Government at a rate of which every £100 paid into the company by the taxpayer, DeLorean only had to repay £1. In 16 months a 660,000 ft² factory had been built in the Dunmurry suburb of Belfast.

At the same time he began to design the company’s first (and what would turn out to be only) product the DMC-12. Designed by Giorgetto Giugiaro, the car was meant to look like a machine that was not of this world, or had accidentally be sent back in time by some fuddy duddy in the future (I’ll get round to that later). With Gullwing doors, a stainless steel body and top of the range safety features including airbags and a crash-resistant plastic understructure.

However, beneath the futuristic body the car was very primitive. DeLorean had signed a deal with Lotus to help him develop the car, but this would ultimately result in the car being more a Lotus Esprit with a different body.

The promised rigidity of the car during crashes using ERM (Elastic Reservoir Moulding) was replaced by a conventional chassis and resin. Eventually even Airbags weren’t included in the final model.

In a panic to get the cars into production in 2 years rather than the recommended 5, hastily put together durability tests were carried out by driving the cars round and round a racetrack constantly until bits fell off.

The built quality too was very much shambolic to say the least. The iconic Gullwing doors were given struts that were too weak and therefore never worked properly, resulting in them not fully opening.

The engine was not sterling and new, but instead was an age old 2.6L Renault V6 from a Renault 30, producing only a measly 130bhp resulting in the car being heavily underpowered.

The suspension had to be modified with springs, the driving experience was claustrophobic and dark, the alternator was too weak for the electronics and thus went flat in no time, often with the result of locking the occupants inside due to the electric central locking system, the stainless steel body was easily stained even by fingerprints, it had panel gaps that you could drive a bus through, the car handled like soap and was supposed to cost $12,000 but ended up entering sales at £26,000, which made it impossible to compete with similar Porsche’s and Merc’s of that price range which were also much, much better.

But either way the car went on sale in 1981 to a huge fan-fare, with the car outselling Porsche and having deposits backing up at showrooms across America.

However, the honeymoon soon wore off and by 1982 only 4,500 of the proposed 10,000 cars per year were sold. In fact eventually only 8,000 cars would be built, meaning DeLorean had failed to reach this target on both accounts.

But DeLorean continued to be ambitious and floated the company on the stock market, upping production at the factory to make things look busy and putting raw recruits straight onto the shop floor. The result was that Belfast’s workforce were churning out thousands of cars no one wanted and thus were losing a fortune.

Eventually he turned to the British Government for some extra money, but the new government under Mrs. Thatcher was no longer willing to give subsidies following their confrontations with British Leyland.

The end came when DeLorean was arrested by the FBI for brokering Cocaine deals to help fund the company. Although acquitted on the grounds of entrapment, the company went bust in 1983 and the 2,600 Belfast workers, who despite working to the very end to keep on making cars, were turned away, with the remaining cars and equipment being auctioned off for what little money they could salvage.

Of the £800 million put into the company by the American and British governments, the resulting accounting recalculations found that only about £100,000 of that could be reclaimed, with another $17 million disappearing without trace.

But the DMC-12 went on to find a celebrity future as its space-age looks made it the perfect Time-Machine for the fantastic Back to the Future trilogy. But that is very much the thing that made the DMC-12 win in the end, the fact that even today seeing one parked on the street, people cannot help but stop and stare in fascination. Although not everyone knows about the trouble that surrounded this car’s short construction life, it is what most people recognize it by, a pure mixture of style and scandal, a car with a criminal past…