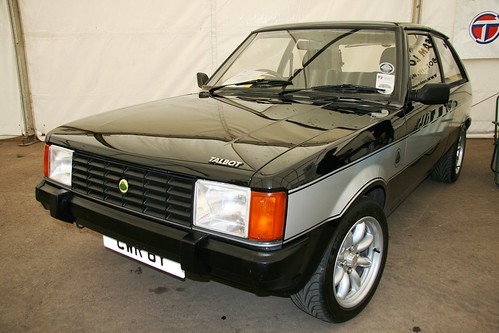 1982 CWR 8Y Talbot Lotus Sunbeam. The Talbot Sunbeam Lotus was based on the Sunbeam 1.6 GLS, but fitted with stiffer suspension, larger anti-roll bar and tougher gearbox casings. The drivetrain comprised an enlarged 2172 cc version of Lotus 2-litre, 16V slant four engine (the Sunbeam version being type 911, similar to Lotus 912), along with a ZF gearbox, both mounted in the car at Ludham airfield close to the Lotus facility in Hethel, Norfolk, where the almost-complete cars were shipped from Linwood. Final inspection, in turn, took place in Stoke, Coventry.

The Sunbeam Lotus was unveiled at the Geneva Motor Show in April 1979, but the road-going version of the rally car was not actually ready for deliveries to the public until after the rebranding, and thus became the Talbot Sunbeam Lotus. At first these were produced mostly in black and silver, although later models came in a turquoise and silver (or black) scheme. The car saw not only enthusiastic press reviews, but also much success in the World Rally Championship – in 1980, Henri Toivonen won the 29th Lombard RAC Rally in one, and in 1981 the Sunbeam Lotus brought the entire Manufacturer Championship to Talbot.