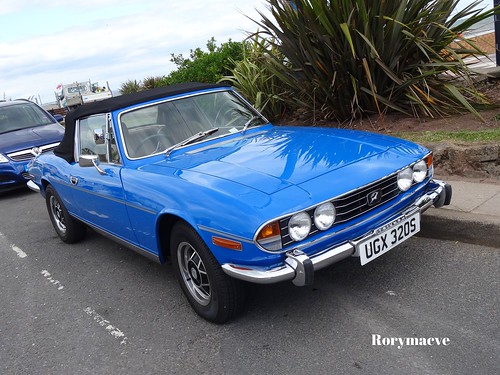 Oh the possibilities, sadly missed through poor design and negligence! You cannot deny then that it’s a British Leyland product, taking a car with a fantastic premise, but through sloppy workmanship make it something of nightmares! No car seems to encapsulate the problems with the nationalised company more than the humble Triumph Stag.

To compete with the likes of the Mercedes-Benz SL, British Leyland started work on a luxury Grand Tourer, styled by the world renowned Giovanni Michelotti, who had previously designed the Triumph 2000, the Triumph Herald and the Triumph TR6, and would later go on to design the ambiguous Austin Apache and the Leyland National bus. But either way his styling was sensational, but at the same time the car had substance too. In the late 1960’s America was on the verge of banning convertible cars to increase safety. So the engineers at Triumph designed what was a very clever T-Bar rollcage over the passenger cabin, meaning the car was not only safe, but also allowed the owners to enjoy what was craved most in a Grand Tourer, drop-top open-air fun! This was complimented by a selection of cars with removable Hard-Tops, although not as popular due to being slightly more complicated. The name was great too, sounding very manly with a hint of beast-like qualities, which for the most part helps to form the image, a strong and noble creature of the wild stood proud amongst its peers…

…only without the antlers!

In 1970 the car was launched to the motoring press with some very favourable initial reviews, admiring the styling, the firm suspension that resulted in a smooth ride and the well-balanced handling. The car was immediately an image setter for the new-money, like the Mercedes it was competing with it had the image of being something for those who had made their money through more underhanded methods, a cads car if you will. But we’ve all got to make our money somehow I guess!

However, lest we forget that this was a British Leyland product, so of course trouble was brewing. Very quickly the car gained a reputation for unreliability, which can be traced back to that all important piece of machinery known simply as the engine. In 1969 whilst the Triumph Stag was in development, Rover began using their new license built V8 engine derived from an American Buick 215 3L powerplant. Originally this was installed into the Rover P5, but a 3.5L version was installed as standard to the Rover P6 and the later SD1, as well as becoming the motive power behind the almighty Range Rover. The Rover V8 was an incredibly reliable and endlessly tunable engine, making it one of the most popular and successful powerplants in automotive history. It made its way into the TVR Chimera, the Morgan Plus 8, the TVR 350i, the Land Rover Defender, the Land Rover Discovery, the Sisu Nasu All-Terrain Military Transport, the MG RV8, the MGB GT, the TVR Griffith, the TVR S-Series, the Leyland P76, the Triumph TR8 and so on! It was eventually removed from production in 2006, being replaced in the Range Rover it had served so well by a BMW powerplant.

But back to the Stag, and seeing as Triumph and Rover belonged to the same parent company, you’d think that their first instinct would be to place this heavenly engine into the Stag. Apparently that was too much to ask for, and so Triumph, still thinking they were Triumph, decided to develop their own engine because apparently the Rover V8 wouldn’t fit in the engine bay of the Stag. Rather than doing the simple task of redesigning the engine bay to accommodate the new engine, Triumph developed their own ragtag V8 by welding together two of the Straight-4 engines you’d find in a Triumph Dolomite. Chucked together at the last minute, the new Twin Dolomite V8 was not a stellar piece of engineering like the Rover variant, its main downfall being the failure to install a proper cooling system. This illogical oversight of something so obvious meant that the engine would heat up easily, and result in the cylinder heads warping, rendering the engine totally useless. The engine was also prone to corrosion and roller link chains that would fail before 25,000 miles causing expensive damage.

As a result of the bad press of the engine, mixed with the terrible build quality that we’d all come to expect from British Leyland, the Stag was removed from the American market in 1973, and finished off here in 1977 by its spiritual replacement, the Triumph TR7, an equally as flawed concept that chose not to learn its lesson and use exactly the same flawed engine, dashing that car’s hopes of success too whilst adding a less than stellar body design to its troubles. Eventually the Stag slipped quietly away after 25,000 examples were built, although one did feature in the James Bond film ‘Diamonds are Forever’, being driven to Amsterdam by Bond after half-inching it from Diamond Smuggler Peter Franks.

This particular story maddens me because I consider the Triumph Stag my favourite of the British Leyland range as it really is a beautiful car and performs very well. Like I said, it’s very smooth to ride in and very easy to drive, but the sheer lack of communication and cooperation between two parts of the same company resulted in it being one of the biggest flops in motoring history, and has often been cited as one of the worst cars ever.

Today however there is still quite a sizeable fanbase for this car, with 9,000 Stags still registered as roadworthy, making it one of the most numerous British Leyland products to remain in ongoing use, especially when you compare it to the Austin Allegro’s 291 survivors, Morris Marina’s 674, and the Rover SD1’s 310. The surviving Stags are mostly made up of cars that have had their original Triumph engines replaced by the Rover V8 to improve the performance and reliability. With a Rover V8 under the hood, this car is simply one of the best classic cars ever in my mind, a mixture of style, speed, performance and that wonderful rumble from under the bonnet. For the remainder still with the Twin Dolomite V8, most have been fixed by installing a proper cooling system and solving the corrosion issues. Today the Stags enjoy the popular life that British Leyland had envisaged for their luxury machines way back in 1970, 45 years late mind you but I suppose you can’t have everything first time round!