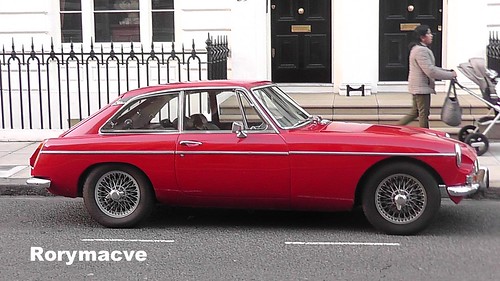 Certainly one of the more popular versions of the MGB, and my favourite version of them all, the MGB GT gave the plucky British sports car a hard top for those who didn’t live in the south of France and didn’t like the idea of rain filling up the footwell.

The MGB GT was first built in 1965, sporting a revolutionary ‘Greenhouse’ cabin designed by Pininfarina, and featured a very swish looking hatchback and fastback rear. The car was perfect for the American market too as the threat of banning convertible cars loomed over world motor manufacturers, but the GT didn’t survive there long and was removed from the market in 1974.

From the GT though many different variations came into being under British Leyland. In 1967 the MGC was built, a short lived venture that included the fitting of a much larger BMC engine, but this resulted in weighing down the front suspension and creating a large bulge in the bonnet.

This was replaced in 1973 by the MGB GT V8, a reworked version fitted with the famous Rover V8 engine, but this too didn’t last long and construction was killed off in 1976.

However, the original MGB GT continued to soldier on until the end of the MGB line in 1980, and today holds quite a fond fanbase as simple, fun motoring.