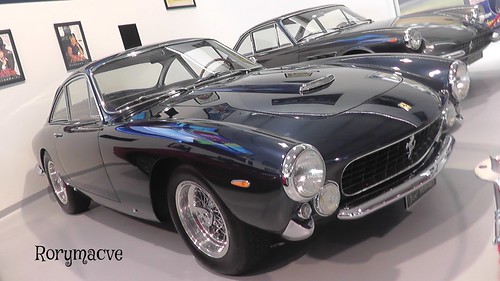 One of the rarest of the rare, the Ferrari flagship of the 1950’s and 60’s that took the world by storm, thunder, and any other meteorological metaphors you wish to insert!

Certainly a close second to the mighty Daytona’s beauty, the Ferrari 250 was once one of the world’s most desirable cars, with those crisp smooth lines and iconic engine sound echoing across both Europe and the USA.

The car was also built in a myriad of variations, 8 racing models, 2 Export/Europa models, and 14 GT models, including the Pininfarina Coupé Speciale, the Berlinetta "Tour de France" and the Spyder California SWB.

This particular version is a 250GT Lusso, manufactured between 1963 and 64. Sometimes known as the GTL, GT/L or Berlinetta Lusso, it is larger and more luxurious than the 250GT Berlinetta. The 250GT Lusso, which was not intended to compete in sports car racing, is considered to be one of the most elegant Ferraris.

Keeping in line with the Ferrari tradition of the time, the 250GT Lusso was designed by the Turinese coachbuilder Pininfarina, and bodied by Carrozzeria Scaglietti. Although the interior was more spacious than that of the 250 GT, the 250 GT Lusso remained a two-seat GT coupe, unlike the 250 GTE. The car was manufactured for only eighteen months, from early 1963 to mid 1964, and was the last model of Ferrari 250GT generation.

Auto shows often provide an opportunity for manufacturers to introduce new designs publicly. Ferrari did so at the 1962 Paris Motor Show to unveil, as a prototype, the 250 GT Lusso. The prototype was almost identical to the production version, and only minor details changed thereafter.

The new model was a way for Ferrari to fill a void left between the sporty 250GT SWB and the luxurious 250GTE 2+2, the Lusso met the new demands of the 1960s. Indeed, fans of sporting driving of the time became as fond of civilized designs, that is, comfortable and spacious, as they were of radical sports cars. Ferrari did not skimp on details in the GTL, which shows on the scales; weight ranged from 2,250 to 2,890lb, depending on equipment.

Unusually brief for a Ferrari model, GTL’s production began January 1963 and ended August 1964. According to a longstanding American expert on Ferrari, Peter Coltrin, the construction of the 250 GT Lusso must have begun soon after the presentation of the prototype of the Paris Motor Show.