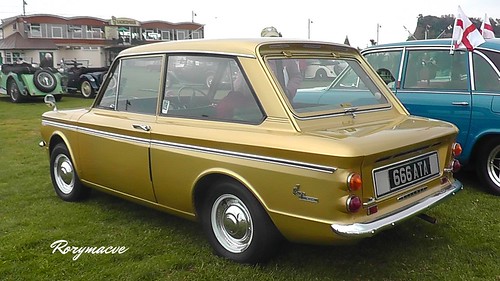 A car who’s name lives in British motoring infamy, a small and subtle little machine that was meant to take on the Mini, but went on to kill the Scottish Motor Industry.

The Hillman Imp was meant to be the company’s great white hope, entering production in 1963 after millions of pounds of investment, including the construction of a new factory at Linwood near Glasgow.

However, Hillman were impatient to get their car into the showrooms, and although there was a huge opening ceremony at the Linwood Factory featuring an appearance by HRH Prince Philip, Hillman had cut some corners. The Prince was only shown certain parts of the factory as most areas had not been finished, and the selection of seven cars he and his entourage were driven round in were in fact the only seven cars that would work properly.

The rest of the cars being produced were tested exhaustively by drivers hired in from the local population, basically driven until the cars wouldn’t run any more, but the distances between breakdowns were very short, some being as low as 30 miles.

Nevertheless the car was produced at the Linwood factory, which employed 6,000 people from one of the most impoverished areas of Scotland. All seemed well, until the sales numbers came in, which showed the initial problems had damaged the car’s reputation and thus resulted in it never selling the the estimated numbers. This was added to by heavy industrial action carried out by the workforce, which resulted in the factory only working at a third the capacity and suffering from many stoppages.

Because of this, the Hillman brand began to suffer, and although cars such as the Avenger, the company folded in 1976, the factory being taken over by Peugeot-Talbot. The factory continued on until 1981 and quickly demolished, resulting in high unemployment that even to this day struggles to recover.